KLF Bhava Samvad to witness discussions on books- ‘Rebellious Lord’, ‘Mahabharata Series’, ‘Because India Comes First’, ‘The Awasthis Of Aamnagri’, ‘Rebels With A Cause’. 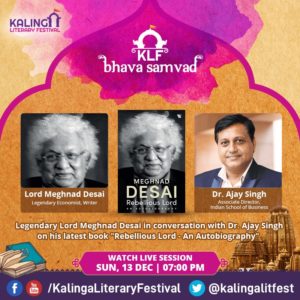 Renowned Political thinker, writer Ram Madhav (Member, Board of Governors, India Foundation) will be in conversation with Journalist, and Editor-Politics in National Bureau of The Hindu,  Nistula Hebbar on his new book “Because India Comes First” on December 10,7pm. Legendary economist, writer Lord Meghnad Desai will be in conversation with Dr. Ajay Singh (Associate Director, Indian School of Business)  on his latest book “Rebellious Lord – An Autobiography”   on December 13,7pm. 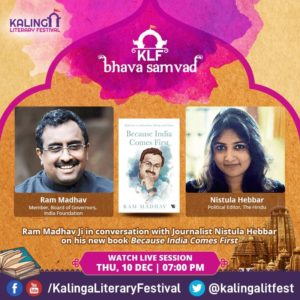 Drawing from his years of involvement in politics, Ram Madhav’s essays discuss a range of issues that are at the heart of contemporary debates in India: democracy as the responsibility of the head of state, rule of law, peace and public order, Mahatma Gandhi and Gandhi-ism, Ambedkar’s ideals, empowerment of women, Indian judiciary, the Ram Janmabhoomi case, abrogation of Article 370, the legacies of Atal Bihari Vajpayee and Arun Jaitley, and Prime Minister Narendra Modi’s learnings in governance.

‘Because India Comes First’ also delves into the decisions made by the BJP-led government over the last few years, diplomatic relationships with India’s neighbours and the confrontations with China. Madhav enquires into Indian policymaking and asserts that, going ahead, it must put India first. He calls out liberal fascism, deconstructs our understanding of terrorism in India, argues that opposition to the Citizenship (Amendment) Act is intellectually dishonest, explores how learnings from Black Lives Matter can be applied in the Indian sphere and explains why protests should be rooted in Martin Luther King Jr.’s non-violent approach and not anarchy. The essays in this volume weave a broad tapestry of India’s growth into a soft power, and predicts how it will shape up over the next few decades. A must read for those who believe in the new idea of India, and for those who accept that there are two sides to every debate. He will be seen in conversation with journalist Nistula Hebbar on 10 December at 7 pm.

‘The Rebellious Lord’ is the autobiography of Lord Meghnad Desai that begins with his life from Vadodara, Gujarat. Desai grew up in an India that was still shiny and new and filled with every kind of potential. But seeking fresh academic challenges, he left for the US and then the UK, quite certain that his future lay elsewhere. As he participated in the student protests that spread across the Western world in 1968-1969, his political energy and ideas began to find focus. This was also perhaps the root of his unorthodox approach towards economics.

A scholar of Marxian economics, political economy, monetary policy and economic history, Desai founded the Centre for the Study of Global Governance at the London School of Economics (LSE) as well as LSE’s Development Studies programme. He is also one of the creators of the Human Development Index—an inclusive index that quantifies development.His session at KLF Bhava Samvad will be focusing on his autobiography with Dr. Ajay Singh on 13th December at 7 pm. 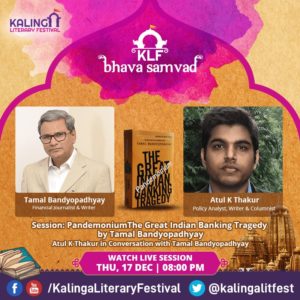 Writer Tamal Bandyopadhyay will be conversing with columnist Atul K. Thakur about his book In ‘Pandemonium: The Great Indian Banking Tragedy’. The book is a definitive insider story on the rot in India’s banking system – how many promoters easily swapped equity with debt as bank managements looked the other way to protect their balance sheets, until the RBI began waging a war against ballooning bad loans. The same troubles quickly spilled over to India’s mushrooming non-banking financial companies, which were quick to spot the post-demonetisation easy liquidity and banks’ reluctance to lend, prompting them to make the cardinal sin of borrowing short to lend long.A timely and insider look at dramatic forces reshaping banking in Asia’s third-largest economy, this book is a bird’s-eye view of Indian banking and also a fly-on-wall documentary. A must-read to understand contemporary India’s challenges and economic potential. His session will take place with Atul K. Thakur on 17th December at 8 pm. 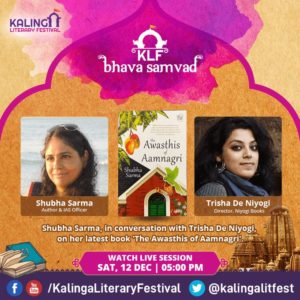 Team from WeSchool, Mumbai announced winner of the national…

Author Subha Sarma is an alumnus of Lady Shri Ram College and Jawaharlal Nehru University and a member of the Indian Administrative Service. After her debuting with ‘Fly on the Wall & Other Stories’, ‘The Awasthis of Aamnagri’ showcases a quintessential middle class family from the Hindi heartland. The session will be taking place on 12th December at 5 pm.

It should be noted that Kalinga Literary Festival (KLF)’s initiative KLF Bhava Samvad hosted the legendary literary figure Amitav Ghosh on 3rd December on the occasion of its 100th session completion. The KLF has launched ‘KLF Bhava Samvad’ to bring poets, writers, thinkers, philosophers, public intellectuals, spiritual masters, researchers, performers, and common citizens to reflect upon the lives and emotions around us during this lockdown and beyond. The platform has successfully reached over 20 lakh audience by now. 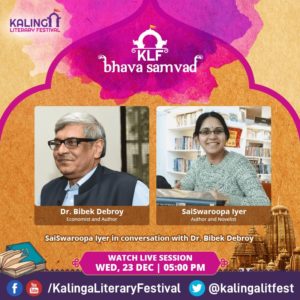 Bibek Debroy’s Mahabharata Series can fascinate anybody who belongs to India or holds an interest in mythology, will know the value that Mahabharata has. It is remembered as a war between two mammoth cousin families

‘The Pandavas’ and ‘The Kauravas’ were two cousin families which have had many disputes over land and Kingdom over the years. However, Mahabharata is about the conflicts of ‘Dharma’. The ‘epic’ is said to feature every possible human emotion throughout the course of the war. The conflicts are intense and innumerable. There are no rules except the rule of ‘Dharma’. There are no clear directions to any right doings or wrong doings for the characters. Each action would have a consequence that they would have to bear.

The epic also leaves the readers with many moral value lessons. The Mahabharata is known to be one of the most legendary books, one which has been etched in the history of our nation.

Acclaimed mythologist and writer Bibek Debroy belongs to the state of West Bengal, India. He is known to be a popular economist and has also published many articles, books and papers that have gained recognition in the field. His interests also include subjects like Indology and Sanskrit. Some of his famous works include Sarama and Her Children: The Dog in Indian Myth and his translation of the holy book of Hinduism, that is The Bhagvad Gita. Bibek Debroy has been honoured for his work and knowledge by a Padma Shri award in the year 2015.

He is a member of Niti Aayog. He is an economist who has published popular articles, papers and books on economics. He also writes on Indology and Sanskrit. Penguin published Sarama and Her Children: The Dog in Indian Myth in 2008 and his translation of the Bhagavad Gita in 2006. Bibek Debroy was awarded the Padma Shri in 2015. His session at KLF Bhava Samvad with mythologist Saiswaroopa Iyer on 23rd December at 5 pm.

Prof. TT Ram Mohan’s ‘Rebels With A Cause’ speaks about democratic societies taking pride in the freedom of expression. Indeed, the right to dissent and tolerance of diverse viewpoints distinguish a democratic society from a dictatorship. In his new book, Prof. T.T. Ram Mohan profiles well-known dissenters Arundhati Roy, Oliver Stone, Kancha Ilaiah, David Irving, Yanis Varoufakis, U.G. Krishnamurti and John Pilger to illustrate how, in practice, dissent tends to be severely circumscribed. It is only the celebrity status of these dissenters that has kept them from being actively harmed. Through an exploration of the lives and ideas of these personalities, the author argues that, while one may not agree with their positions on various issues, their views merit discussion and debate. Engaging with them and responding to their analyses holds out the prospect for substantive reform within the system. Yet, the dominant elites prefer not to do so, instead marginalizing and even ostracizing dissenters precisely because they find change of any sort threatening.

Rebels with a Cause is a book that asks hard questions to challenge the way we view, and live in, the world-an important book for anyone who refuses to accept the status quo.

T.T. RAM MOHAN, professor of finance and economics at IIM Ahmedabad, graduated from IIT Bombay and IIM Calcutta and obtained his doctorate from Stern School of Business, New York University. He has been, at various points in time, a management consultant, banker, investment banker and financial journalist.Prof. Ram Mohan has written for several publications, including The Economic Times, Business Standard, The Hindu, The Wire, BloombergQuint and Quartz. He has served on the boards of several companies and been a member of committees of the Reserve Bank of India and the Securities and Exchange Board of India.

His earlier books include Privatisation in India: Challenging Economic Orthodoxy; Brick by Red Brick: Ravi Matthai and the Making of IIM Ahmedabad; Rethinc: What’s Broke at Today’s Corporations and How to Fix It; and Towards a Safer World of Banking: Bank Regulation after the Sub-Prime Crisis. He will be seen in conversation with Atul K Thakur on KLF Bhava Samvad on 13 December at 5 pm.

Speaking about it, Mr Rashmi Ranjan Parida, founder and director of KLF said, “KLF Bhava Samvad was initiated to keep the literary spirit intact during lockdown because of pandemic. But the rapid growth of the platform and after receiving immense love from the audience, KLF Bhava Samvad has reached its 100th session with legendary literary figures, artistes across the globe and will continue to live as a permanent platform.”