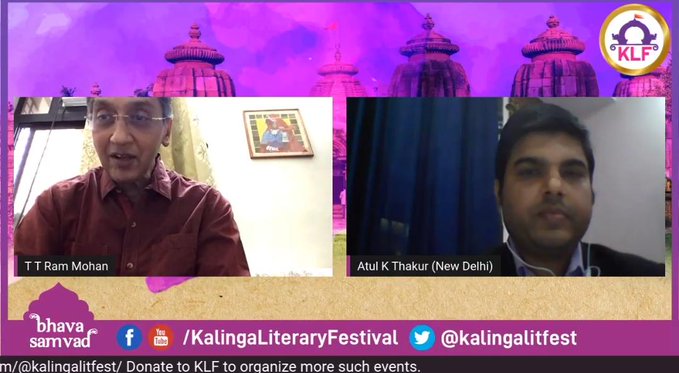 New Delhi: Kalinga Literary Festival (KLF) organised a session with Prof T T Ram Mohan at KLF’s Bhava Samvad on December 13. Prof T T Ram Mohan, Professor of Economics and Finance, IIM Ahmedabad, Author & Columnist was in conversation with Atul K Thakur, Policy Analyst, Columnist & Author. The candid discussion was centered on Prof Ram Mohan’s new book “Rebels with a Cause”—a book on the dissents and dissenters published by Penguin. In his book, Prof Ram Mohan profiles well-known dissenters Arundhati Roy, Oliver Stone, Kancha Ilaiah, David Irving, Yanis Varoufakis, U G Krishnamurti and John Pilger to illustrate how dissent tends to be severely circumscribed. Explaining the lives and ideas of these personalities. Prof Ram Mohan argues that while one may not agree with their positions on several issues, their views have merit to discuss and debate.

While talking about the state of democracy in India and its capacity to accommodate the dissents, Prof Ram Mohan said that our democracy has shown an amazing level of maturity—and in comparison to western democracies, its track has been better. Also, he added that the government should be credited for introducing progressive policies—and hailed how the efforts made for coping the challenges of Covid-19 in India. On being asked if India is facing a sort of ‘policy crisis’, he ruled it out saying India has done well despite confronting pressing challenges. About the role of the media, he said that it is hard to see it in totality. There is hope, there is despair. The talk concluded on a positive note about the fate of the world’s largest democracy, India.