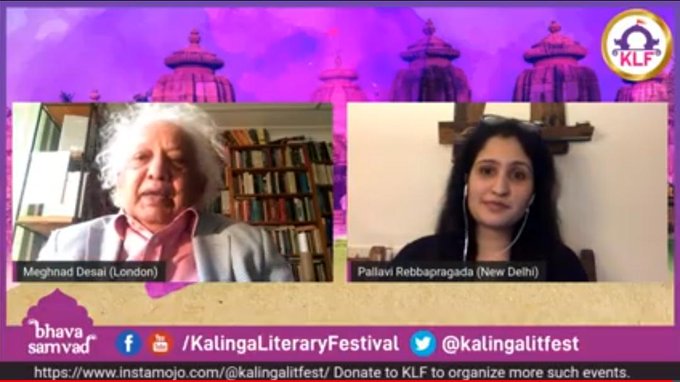 New Delhi: “Most Marxists are Leninists with deep suspicion of markets in Indian context,” writes Lord Meghnad Desai in his recently published autobiography “Rebellious Lord” from Westland. He confesses how he was inclined to the right wing before he left India. Desai puts it strongly that conformism in India is believed to be good. Desai’s autobiography provides a window to glimpse into his deep-thought process along with his childhood memory of per-liberalisation era in India. On the contrary to the established norm of being a veteran world-known economist and decoding complexities of world economy, in his autobiography, he has penned down his childhood memory of pre-independence and per-liberalisation eras of India.

Kalinga Literary Festival (KLF) organised a session with Lord Meghnad Desai to talk about his book with Pallavai Rebbapragada, Journalist, Author & Policy Fellow, Delhi Vidhan Sabha. On being asked about the title of book which starts with term ‘Rebellious’ and on the other hand being ‘cautious about not being deported out of USA’, Desai said, “when you are at 33 and abroad with no H1VI visa, you need to be cautious for not to be deported.” Recounting the early days of Civil Rights Movement in America, he said that injustice and discrimination with black people inspired him for the peaceful means of protest. He said, “I was more adventurous in the sense that I felt angry for discrimination with black people.”

While talking about per-liberalisation eras in India, especially in 1960s, he said he was under influence of the right wing and in fact attended the foundational meetings of Swatantra Party which once Nehru described as a ‘Party of Zamindars’. He said he was always willing to hear Jai Prakash Narayan. He said, “I was not a member of the Swatantra Party but as a Gandhian Socialist, I always welcomed it.” Desai said when he left India, he moved away from all these. He also remembered his Alma Mater Delhi School of Economics (DSE) and said that there was comparative ‘Left Wing’ and everybody had to be from the left wing in the fifties and sixties there. He said, “I found them very shallow as I had read left classics and taught Marxism.” On the Primary education system of India, he said that ‘reason with reading’ should be the basic idea for education which is being implemented abroad.