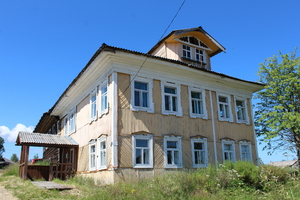 The work at the first stage of the complex expedition “Karelian Pomorie – 2021” has been completed.
Within the framework of the complex expedition “Karelian Pomorie – 2021”, which is planned for the current year on the basis of two Gumpark laboratories: the Research Laboratory of Local and Microhistory of Karelia (ILLMIK) (headed by I.A. leader E.R. Guseva), the first stage was successfully completed. The members of the detachment representing ILLMIK, Polina Voronina and Elvira Dzhioshvili, continued working on the creation of an electronic catalog of the Pomor Life Museum “Trash Barn” in the village of Nyukhcha, Belomorsky District.

“Rubbish shed” is a unique museum of Pomor life, entirely created from exhibits donated by local residents. The collection, significant to date, contains old Pomeranian outfits, various textiles, fishing tools, household items and interior items, foreign items, testifying to trade contacts with the Nordic countries. Since 2014, the museum has been located in a two-story wooden house, the first owner of which was the merchant Ponomarev.

The cataloging of the museum’s funds has been going on for the third year already, all this time the members of the expedition have been working with the most active assistance and leadership of Nadezhda Sergeevna Semyonova, the creator and curator of the museum.

The work of creating an electronic catalog only seems simple, in fact it requires a serious concentration of attention and some preparation: each item must be measured, the technique and materials from which it is made, the name of the donor must be determined, the tags and stamps must be identified in order to establish the manufacturer. … It is difficult, but very interesting,

– said the participant of the expedition Polina Voronina, administrator of the Humanitarian Park of PetrSU.

According to the report of the expedition members, the creation of an electronic card index with descriptions of all the museum exhibits during the first stage of the expedition has been completed: information on more than 600 items that are stored in the “Trash Barn” has been entered into a specially developed form of the database card. In order for the card index to become a catalog, a large office work must be completed to check and clarify the information entered, to clarify and correct all the necessary attribute data. Then the catalog will be registered with the Federal Service for Intellectual Property of the Russian Federation.

It should be noted that ILLMIK has accumulated a large fruitful experience of working with rural museums: staff and volunteer students involved in the laboratory’s activities have been working for several years in a row to create an electronic catalog of the literary museum of the People’s Writer of Karelia Ortyo Stepanov in the village of Haikola, Kalevala region, which is currently is a unique museum of the North Karelian folk life. This year, work has begun on cataloging the exhibits of the Rune Singers Museum in the village of Kalevala. In addition, in August, within the framework of the project “Initiatives for Rural Museums of Karelia: Gridino”, supported by the Presidential Grants Fund, an expedition will take place to the village of Gridino in the Kemsky District to catalog the exhibits of the local museum.

The expedition “Karelian Pomorie – 2021” will continue its work at the beginning of September, when, in agreement with the local residents – the custodians of intellectual and materialized monuments of the national Pomor culture, the second and third expeditionary teams consisting of staff and volunteers of ILLMIK and LKE will go to Nyukhcha.

PetrSU students – as part of the Mir medical team