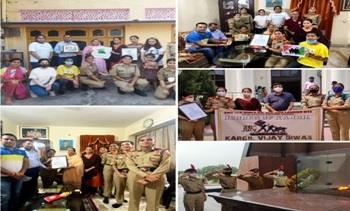 The widows of war heroes who sacrificed their life during Kargil war were felicitated by presenting them specially designed mementos, sketches and handmade letters.

The cadet interacted at length With “VEER NAARIS”, parents, family members of the “Heroes” and listened to the tales of heroism where the “Mother of Shaheed Hav. Udham Singh ” who is popularly known as “TIGER OF TIGER HILL ” she proudly said my son was “SHER”. He killed 20 enemies before attaining martyrdom. The tears also rolled down from her eyes when “Cdt. Marvi Rajput” showed a self made sketch of her son and she said “YEH TOH MERA BETA UDHAM HAI.”

Kamala Devi, VEER NAARI of “Shaheed Hav. Madan Lal VrC” told the cadets that uniform and country was her first love; she also showed his uniform to cadets which he used to wear with pride.

The tears rolled down from the \ eyes of Veena Jasortia the mother of Shaheed MAJ. Ajay Singh Jasrotia when Cdt. Ariya presented them a handmade letter in which she had written that he is the source of inspiration for the whole country and the people.

Ex Hav. Pradeep Singh from Reg.corps of Signals said to the Cdt. that if I get the chance to wear the uniform again I won’t even think for one second I am ready to serve the nation again.

Overwhelmed with all the emotions and witnessing the saga of sacrifice, courage, value, brotherhood, pride, integrity and patriotism the cadets also paid tribute to the fallen heroes at the “BALIDAAN STAMBH” by wreath laying ceremony.