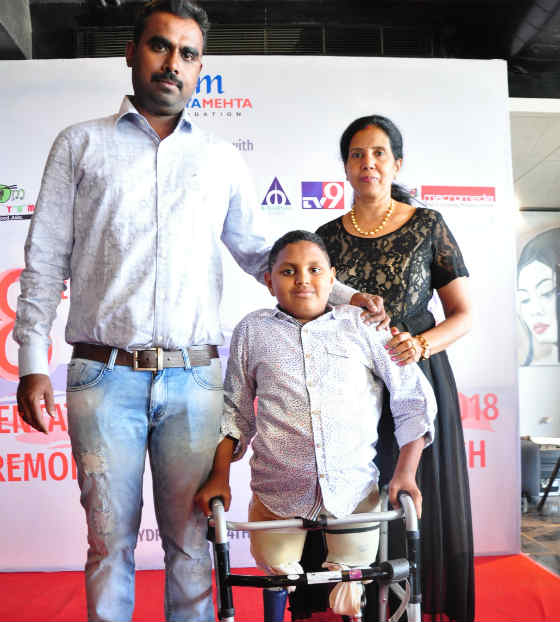 Bengaluru: Gopichand, Karnataka’s 12 years old para swimming sensation, was honored by Aditya Mehta Foundation (AMF) and has been assured support to pursue his swimming career both at the international and national level.

Impressed by Gopichand’s achievements at the para swimming championships during 2016-17 and 2017-18, and assessing his potential AMF has donated artificial limbs worth Rs. 7.50 lakhs to enable Gopichand overcome his physical disability.

Further, AMF will sponsor Gopichand’s participation at Tokyo 2020 Paralympic Games, being held at Tokyo, Japan, between August 25 and September 6, 2020. Also AMF will support the child para swimming champion to participate in other international games on a case-to-case basis.

Gopichand, born in Daroji Village in Bellary District & just 12 years old, had lost both his limbs in a bus accident during 2014. Not disoriented by the personal tragedy, the young lad started learning swimming since 2016 and has been coached by Rajini Lakka.

Gangadhar Balija, Director, Aditya Mehta Foundation (AMF), said, “We have been in the forefront of scouting differently abled sports talent and nurturing them through our initiatives. Gopichand is an excellent prospect and has already brought laurels for himself and his State at the national level. We are confident that with right and sustained support he could do the nation proud at the international level and thus have taken a conscious decision to sponsor him for the Tokyo 2020 Paralympic Games.”

Telangana State Board Exam Results to be announced on on 27th April, 2018