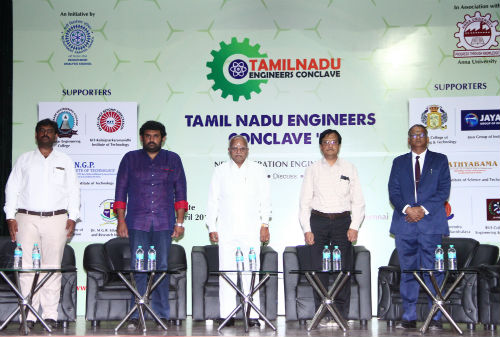 According to Dr. S. Amar Prasad Reddy,Board Chair – Recruitment Analysis Council and Director – General, National Cyber Safety and Security Standards “Tamil Nadu Engineers Conclave’ 18” (for Next Generation Engineers) educates the students in their choice of selecting engineering branches and also aware the students on what it means to be in engineering and provide students with essential skills to be gained to survive in this competitive world.”
Engineering in INDIA:

According to a report, there are 799 Universities, 39071 colleges and 11923 Stand Alone Institutions apprx in India.

For example, “Delhi has less than 100 engineering colleges but they are quality institutions in terms of providing placements to their students. In Tamil Nadu, the ratio of college seats per student is uneven. Having a very high number of colleges also may lead to a decline in quality.

In this regard, “Tamil Nadu Engineers Conclave’ 18” (for Next Generation Engineers) will show the hidden employment and entrepreneurship opportunities in the engineering domain and the skills to be improved to grab the opportunities.

“In 2016, Indian Government has funded around 80,000 startups. Out of these startups, some will shape the future of India at a long run. At present, India requires technology startups and companies than service based ones in order to be in par with countries like Japan, China, Germany.

The problems which are facing today and the problems expected to arise in the first half of the twenty-first century, the engineering profession must revisit its mindset and adopt a new mission statement – to contribute to the building of a more sustainable, stable, and equitable world.

Most engineering achievements of the past were developed without consideration for their social, economic, and environmental impacts on natural systems. Not much attention was paid to minimizing the risk and scale of unplanned or undesirable perturbations in natural systems associated with engineering systems. In addition, engineering educators must take a closer look at how engineering students are being prepared to enter the “real world.”

Current graduates will be called upon to make decisions in a socio-geo-political environment quite different from that of today. Clearly, engineers must complement their technical and analytical capabilities with a broad understanding of so-called “soft” issues that are nontechnical. Experience has shown that social, environmental, economic, cultural, and ethical aspects of a project are often more important than the technical aspects. An issue of equal importance is the education of engineers interested in addressing problems specific to developing communities. These include water provisioning and purification, sanitation, power production, shelter, site planning, infrastructure, food production and distribution, and communication, among many others.

Most of our engineers are not educated to address the needs of the most destitute people on our planet, many of them living in industrialized countries. This is unfortunate, because an estimated 20 percent of the world’s population lacks clean water, 40 percent lacks adequate sanitation, and 20 percent lacks adequate housing. It is clear that engineering education needs to be changed or even reinvented to address the challenges associated with these global problems.