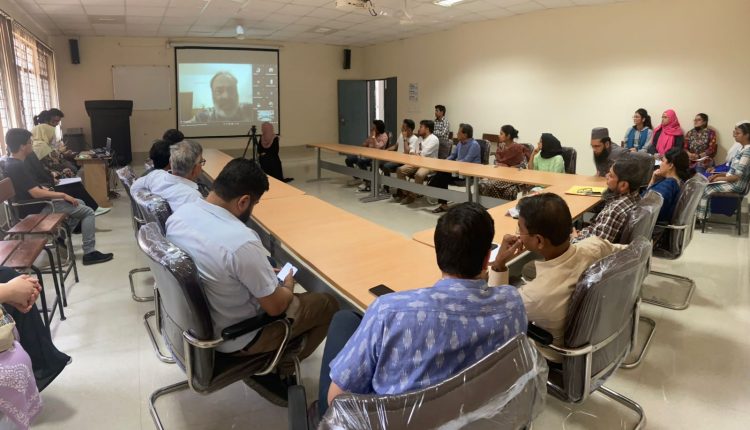 By India Education Diary Bureau Admin On May 5, 2022
Share

Aligarh : A Special Lecture on ‘Indian Independence and Architectural Expression’ of the Department of Architecture, Aligarh Muslim University (AMU), providing insights on the quality and diversity of Indian culture expressed in its buildings—uniquely stamped the celebrations of Azadi Ka Amrit Mahotsav (75 years of Indian Independence) in the memory of university community.

Speaking to the online and offline participants from a remote location, renowned architect and academician, Prof S M Akhtar marked 75 years of Indian independence with discussions on geometric forms, designs based on local environment and post-independence architectural development and evolution in India.

He delineated nuances of architectural expression and their inter-relationship with the complexities of human life, and the development of the Nation.

“After Independence, there was a boom of building activities and there were debates on the style of architecture to be followed. Nationalism was sought to be expressed through revivalism in all forms of cultural expression, including architecture as modern India required modern architectural symbols and forms to express the dynamism of a free people on their march to economic development”, said Prof Akhtar.

He deliberated distinct approaches of architectural expressions in India which were identified during the Post-Independence period such as geometric forms exploiting the potential of concrete, new indigenous language of brick and concrete based on social, functional and climatic considerations and bold articulation of structural elements among other ideas.

The recording of the lecture is available on the link, https://www.youtube.com/watch?v=-KDz690426o.

Countdown begins: Admissions to FORE School of Management’s Fellow Programme in Management to end on May 17, 2022