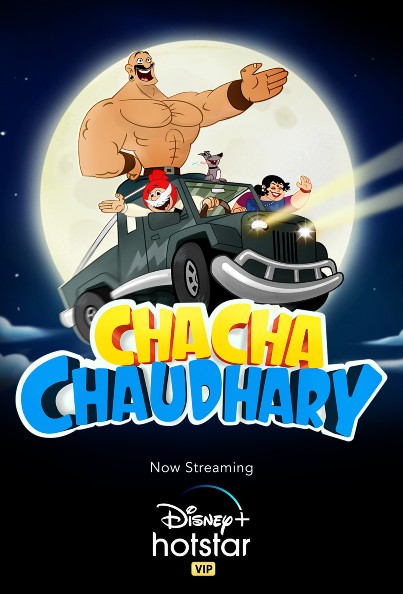 New Delhi: Disney+ Hotstar VIP has added yet another iconic character to its expansive kids catalogue – Chacha Chaudhary. India’s most legendary comic book superstar, Chacha Chaudhary has been an integral part of India’s pop culture from the 1970s and was originally created by Padma Shri awardee and cartoonist Pran Kumar Sharma. The animated rendition produced by Toonz Media Group will be available on demand for streaming from 29th April 2020. As a part of Disney+ Hotstar VIP’s offering, the show will be available in Hindi, Tamil and Telugu so that adults and kids from across the country can go on many problem-solving adventures together! His wisdom and wit have made Chacha Chaudhary the perfect character for people to pass on to their next generations – a show that presents values and life lessons in the form of great entertainment.

Being quintessentially Indian, Chacha Chaudhary’s allure transcends generations and is bound to leave audiences spellbound with 52 episodes of pure entertainment. The series is about a wise man who solves problems with his exceptional intellect along with his friend ‘Sabu’ an inhabitant of the planet Jupiter; who together take down villains like corrupt officials, thieves, cons or local thugs. With Chacha Chaudhary’s brain working faster than a computer and Sabu’s anger resulting in a proverbial eruption of a volcano somewhere in the world, the combination of their incomparable intellect and strength makes everything possible for them. Full of unique characters like Bini (Chacha Chaudhary’s wife) and Rocket (the dog) and unforeseen humor; each episode promises to be a mystery solving laugh riot.

As summertime approaches Disney+ Hotstar VIP has an exciting lineup of kids’ content including popular characters like Doraemon, Shin Chan with movies like Aladdin and Alice in Wonderful that are full of adventure, iconic stories of Winnie The Pooh that teach valuable life lessons based on the importance of friendship and movies like Lion King and Frozen II that help children escape into a world of imagination. With an inbuilt kids-safe mode, parents will now be able to navigate through age appropriate content. Additionally, Disney+ Hotstar VIP continues to offer recently released Bollywood blockbusters including Angrezi Medium and Panga, exclusive Hotstar Specials shows like recently released Hundred and Neeraj Pandey’s Special Ops, the best of global movies & shows in Hindi, Tamil and Telugu including Super Hero movies like The Avengers, Iron Man, Thor: Ragnarok, animation films like Toy Story 4 and Frozen, and popular kids shows like Mickey Mouse Clubhouse, Ducktales and Selfie with Bajrangi, unlimited LIVE sporting action and much more; at an unbeatable price of INR 399/- for a year.