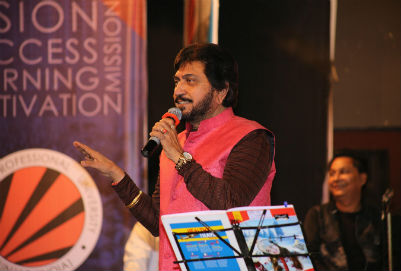 Jalandhar: Widely considered as a “grandfather of music on console, legendary Punjabi singer & actor Surinder Shinda reached Lovely Professional University, today, and interacted with LPU students of ‘Performing Arts & Languages’. Near 600 LPU students accorded traditional Punjabi welcome to Singer Shinda and gathered advice from him to follow, absorb, uphold and propagate rich Punjabi folk culture till time immemorial. Sharing Punjabi folk-culture in depth and dimensions, he also performed on his all- time favourite and hit songs. He also performed on original “Mirza” in “Dhaaeeyaa” sung in olden days by Peeloo Jee in “Raag Talang”.
Interacting with the LPU students, he shared: “No doubt each and every area in this world has its own folk-culture and music, yet I want to say vehemently that Punjabi folk-lore & music is richer, and has more importance than all other genres. If all “Punjabis” are united today, it is only due to this rich heritage of the Punjab. Even in Bollywood hit numbers and rap songs in Canada, America and England imbibe Punjabi flavour and folk beats to gather popularity.” He asked students to be original in their thoughts and performances and to follow the master creators like Bhai Lallo, Bulle Shah, Baba Farid, Pilloo Jee and such like saintly old-times orators; and, even present day great singers like Gurdas Maan.”
Advising students, he asked them to keep on paying respects to their teachers, parents as all ordinary memories are lost but the great words of parents and teachers and even true friends keep on guiding throughout. Answering students’ asking; Shinda shared his personal life full of immense struggles and suggested: “Never lose heart and not get dejected; keep on pursuing your doings and success will be yours.” Answering why youth is attracted to western genres, he labeled it as a human mentality of preferring branded items in the market. However, he stressed that the songs based on much din and clamour have shorter life than old traditional ones, which are always gold.” When one of the students asked why Shinda follows folk genre and not classical, he answered: “I believe in following the profession one likes the most, so I preferred folk as per my passion instead of going for classical genre.”
Surinder Shinda has provided numerous hit songs including “Putt Jattan De”, ‘Truck Billiya”, “Balbiro Bhabhi” and many more and has also appeared in Punjabi films including much popular Putt Jattan De, Uccha Dar Babbe Nanak Da. In addition, his album Putt Sardaran De proved great success in the Punjabi music market. In order to keep on inspiring youth, he is currently working as a producer for younger emerging artists.