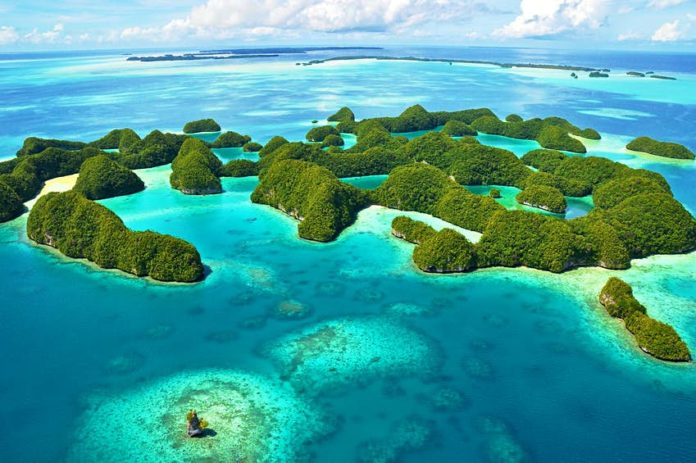 And the increase in area above sea level is likely not confined to Jeh Island on Ailinglaplap Atoll, one of 29 coral reef atolls that form the Republic of the Marshall Islands which lie roughly half way between Hawaii and Australia. The low-lying Islands have been called the most endangered nation on earth due to the potential effects of sea level rise.

Atoll islands like those in the Marshall Islands are low-lying deposits of reef-derived sediments deposited in the last 5000 years or less. Despite local sea level rise, scientists have observed growth in land area of most atolls since the mid-20th century, suggesting they are able to accumulate the sediment needed to expand.

But this process of aggregation of sediment is not well understood. In particular, little research has been done to establish whether sediment deposits which accumulate on coral atolls are recent deposits or sediment that has built up over many decades.

In a new study Dr Murray Ford from the University of Auckland and Professor Paul Kench from Simon Fraser University in Canada compared aerial photographs from 1943 and used satellite imagery and radiocarbon dating of sediment deposits on Jeh Island.

Photographs and satellite images show the island, sparsely populated with about 40 homes, has increased in land area by 13 per cent since 1943, from 2.02 sq km to 2.26 sq km, reaching 2.28 sq km by 2015. It also appears Jeh is a merger of at least two formerly separate islands where sediment has built high enough to form one larger continuous land area.

As well, satellite images from 2010, 2015 and 2019 reveal a spit at the western-most end is continuing to extend, adding to the total land area above sea level.

In trying to track where the island-building sediment is from and how long ago it accumulated, the ages of sediment samples were calculated using radiocarbon dating. The team tested coral fragments, mollusc shells and microscopic marine organisms called foraminifera at the Island’s western end.

In total 28 radiocarbon dates of island sediments were analysed which showed accretion of sediment deposits was from more recent material, generally post-1950.

“This study has found that the expansion of islands through sediment generation under conditions of sea level rise is possible,” Dr Ford says.

“The coral reefs which surround these islands is the engine room of island growth, producing sediment which is washed up on the island shoreline. Healthy coral reefs are essential for this process to continue into the future.

“In this work and in previous studies, we have found islands are resilient in the face of rising seas and that sediment supply to some atolls is out-pacing sea level rise. What we don’t know is how that will play out in coming decades but studies of low-lying reef island formation do need to take these findings into account.”