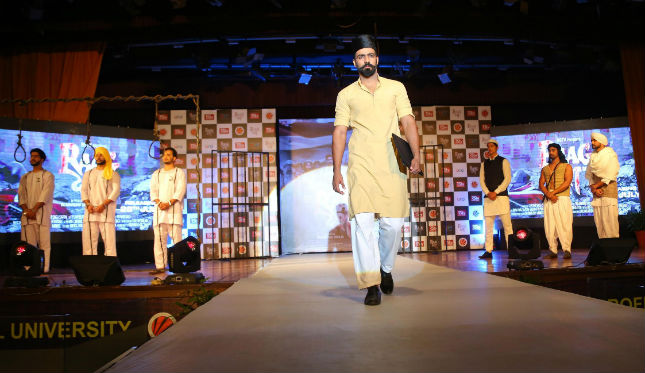 Jalandhar: One of the strong public sector enterprises, Rajya Sabha TV (RSTV) Channel and Lovely Professional University (LPU) co-ordinated to organize an enthralling fashion show ‘RaagDesh’ which was entirely based on Indian freedom fighters. Famous Bollywood stars Kunal Kapoor and Mohit Marwaha were show- stoppers; whereas, CEO & Editor-in-Chief, Rajya Sabha TV, Gurdeep Singh Sappal was the Chief Guest of the occasion. LPU performers, based on students and staff-members, paid emotional tributes to great Indian martyrs who made historic sacrifices for ‘Freedom of India’. The show indeed inculcated fiery spirit of nationalism, patriotism & martyrdom among students in particular and youth as a whole in general. For this unique show, LPU School of Fashion Technology had imbibed great ideas from the forthcoming patriotic film ‘RaagDesh’, which is going to be released on 28th July, 2017.
The five rounds of the show- Sacrifices of Mangal Pandey; Freedom Fighters; Female Warriors; Court Martial 1945; and, Azad Hind Fauz (INA) depicted the sacrificing sagas of Bhagat Singh, Rajguru , Sukhdev, Chander Shekhar Azad, Rani Laxmi Bai, Savitri Bai Phulle and more exuberantly well. Slogans of Inqlaab Zindabad, Vande Matram & Bharat Mata Kee Jai kept on echoing the entire campus throughout the show. LPU Chancellor Mr Ashok Mittal thanked RSTV Channel team and bollywood stars for reaching at the campus and making the show meaningful. Mr Mittal invoked students: “Always keep art, culture, literature and history of the country alive. It has given us all in abundance and we ought to be its true soldiers collectively.”
RSTV CEO Sappal, who is also producer of the forthcoming patriotic film ‘RaagDesh’, informed students that as a public broadcaster his new film is based on Indian National Army (INA) 1945 trials. It is about joint court martial of INA officers Colonel Prem Sehgal, Colonel Gurbaksh Singh Dhillon, and Major General Shah Nawaz Khan. For this, bollywood stars Mohit Marwah, Amit Sadh and Kunal Kapoor have played the lead roles respectively. Addressing the students and staff members, Mr Sappal said: “We all must remember how our fore-fathers got independence for us. This film is a period drama, based on a war and an epic trial thereafter which paved way for India’s freedom from the British Government. This is an entertaining and factual film which will prove to be a must watch movie for each and every Indian.”
Actors Kunal Kapoor and Mohit Marwaha inspired students: “We must stand together for the cause of the nation. Our country is always bigger than any other individual or issue. We must not consider what nation has given to us but we should always be prepared to see what we can do for the nation being above any caste, creed, custom or religion.” They told all that no doubt the three characters of the film were Muslim, Sikh and Hindu but they always stood united to get the country liberated. They asked students to acquire national spirit and character.