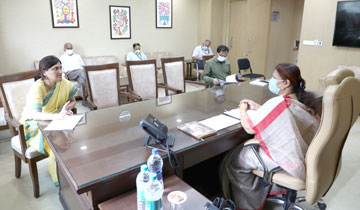 Bhopal : Tribal Welfare Minister Sushri Meena Singh has said that employment opportunities should be increased to prevent migration in tribal areas. He also called for making efforts for women’s empowerment more effective in these areas. Minister Sushri Singh was reviewing schemes at a meeting of departmental officers in Mantralaya. Principal Secretary Smt. Deepali Rastogi was also present in the meeting.

Sushri Singh said that there is need to pay attention to improving the quality of education in tribal areas, government buildings should be built on priority where schools and hostels are being operated in rented buildings. The Tribal Welfare Minister said that skill development works should be started for the empowerment of tribal women. Priority must be given to the work of sewing, embroidery and weaving in these areas.

Schools and hostels must be sanitized

Minister Sushri Meena Singh said that the buildings of departmental schools and hostels in the state should be sanitized completely before the academic session commences. He directed to insure the watchman and other personnel working in hostels and schools during the Corona infection.

Minister Sushri Singh inquired about the status of departmental awards given to institutions and individuals for outstanding work in tribal areas. She also inquired about the incentive amount of Rs 1000 paid to the Baiga tribeswomen.

Principal Secretary Smt. Deepali Rastogi informed during the meeting that 69 Kanya Shiksha Parisar are being operated in the state in which more than 40 thousand tribal girls are receiving education. As many as 2300 students study in the 23 sports complexes of the department. The department has distributed post matric scholarships worth Rs 256 crore to 2 lakh 73 thousand students.

The Principal Secretary informed that the process of installing more than 400 ATMs in the Haat markets in tribal areas is being paced up. Commissioner Tribal Welfare Shri B. Chandrashekhar told that continuous review is being done with the officials of the Project Implementation Unit (PIU) so that the buildings being constructed by the department are constructed on time. Information of the departmental budget was also given in the meeting.

Madhya Pradesh Govt will give Financial assistance to needy advocates

SKIMS Soura is the AIIMS of the Valley and is tackling the novel challenges of the Novel Corona virus: Div Com