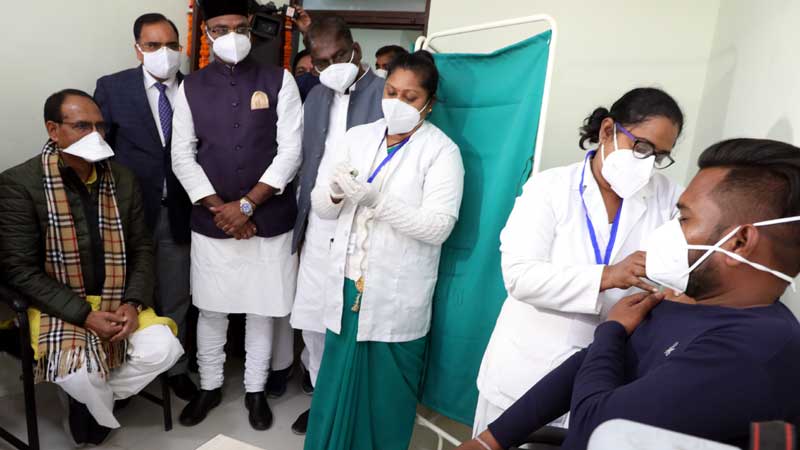 Bhopal : Chief Minister Shri Shivraj Singh Chouhan has said that the creation and use of indigenous vaccine to prevent Corona is a matter of pride. It is the result of the visionary leadership of Prime Minister Shri Modi that from today the countrymen will be able to avail the “Made in India Vaccine”. It has rightly said that “Modi hai to mumkin hai” Chief Minister Shri Chouhan was inaugurating the Covid Vaccine Immunisation Campaign at Covid Block 1 of Hamidia Hospital today. The first vaccine was administered to ward boy Shri Sanjay Yadav, working in Hamidia Hospital on the occasion. In the first phase, 2 lakh 25 thousand vaccines are being administered in the state today.

Chief Minister Shri Chouhan gave detailed information about the vaccination programme in Madhya Pradesh. Chief Minister Shri Chouhan said that Prime Minister Shri Modi is a “Man of Ideas”. He recognized the crisis in time. The efforts made by him for the country for the control of Corona are historical. The making of indigenous vaccines to protect against Corona and the introduction of a countrywide vaccine has started as a campaign from today. For this, our scientists certainly deserve special thanks, who worked day and night to produce the vaccine. I salute the scientific community.

The Chief Minister said that today it is natural to remember the sacrifices of the matyrs who treated Corona victims at a time when people were afraid even by the name of someone infected by Corona. Many doctors lay down their lives while giving treatment services. Vaccination is being started by paying obeisance to them.

Chief Minister Shri Chouhan said that the order of priority for vaccination has been set. In the first phase, Corona warriors including medical and paramedical staff apart from doctors from government and private hospitals will be vaccinated. In the next order, frontline workers including revenue workers, policemen, employees of urban bodies etc. will get vaccinated. Citizens above 50 and those under 50 years but suffering from multiple health issues will be vaccinated. Chief Minister Shri Chouhan said that small health problems may arise after vaccination for which arrangements have been made. This vaccine is safe. After the first dose, the second dose will be administered after 28 days of the first vaccination. After this, antibodies will develop in 14 days. Those vaccinated will be kept under observation for 30 minutes after the vaccination, to see if the concerned person develops any AEFI symptoms for which necessary arrangements have been made.

Work is of national importance, people should avoid criticism

Chief Minister Shri Chouhan said that some people are saying that the Chief Minister will get vaccinated later which is not appropriate. They should think that criticism on every subject is not right. It is an act of national importance. All should be united. The Chief Minister said that he will get the vaccine only after his number comes under the protocol. He said he will get vaccinated in the third phase under the protocol because those who have done the work of saving the lives of people should get vaccinated on priority. This is justified also. The priority that the country has set must be followed. Some people are spreading confusion in this regard, this will not be in the interest of people.

The Chief Minister informed that vaccination has been started at 150 places in the state. In the first phase, Corona warriors will get the benefit. In Madhya Pradesh, vaccines will be administered as per the prescribed categories in order of priority. After the first vaccine is administered, the second dose will be administered after 28 days. It has no side effects and is completely authentic. This will prove effective in protecting citizens from Corona. Instructions to follow the protocol required for the vaccine have been given. Chief Minister Shri Chouhan also congratulated the doctors and paramedical staff of Hamidia Hospital staff on the occasion.

After the beginning of vaccination, Chief Minister Shri Chouhan has appealed to the general public that whenever the order of their vaccination comes, they must get vaccinated and also get the second dose. This has to be taken care of. The Chief Minister said that this is a campaign to end the Corona epidemic. Do not give up using face masks. Necessary precautions have to be taken. We have seen difficult situations. Public must cooperate in the campaign. The Chief Minister recalled that when Corona had entered Madhya Pradesh via Jabalpur in March 2020, there was only one testing lab in the state. Today we can conduct 30 thousand tests a day. Necessary arrangements were also made for medicines. We have moved towards victory. The Chief Minister expressed his gratitude to all Corona warriors on the occasion. He said that all the non-government organizations, District Crisis Management Groups, administrative officers and staff remained active. I am confident that we will totally eliminate Corona.