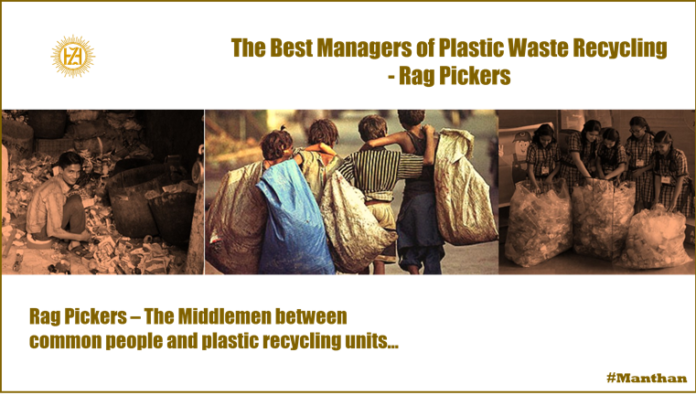 It is quite surprising as how the plastic bottles and broken plastic that we throw in our dustbins becomes part of recycling process and ultimately comes back to us in the shape and form of a finished product. Something that we throw as part of waste becomes means of livelihood for others, or is it that, someone is collecting these plastic waste on our behalf and sending it to its right place – the recycling units ?

Very true. These are Rag Pickers – the Best Managers of Plastic Waste Recycling … They are the ones who do not throw plastic on roads. And they are 4 million of them.

Being the 2nd most populated country in the world, India generates more than 100,000 metric tonnes of solid waste every day out of which 15,000 tonnes is counted as plastic waste and only 60% of this is recycled, according to the Ministry of Environment.

Rag Pickers act as a bridge to connect the community and Plastic waste recycling units. According to ‘India Spend’, Rag Pickers in our country collect almost 50 kg of plastic waste each day from Households, Schools, offices and other dump yards and travel long distances to sell them to several recycling units. According to ‘Banega Swachh India’ report Rag Pickers annually collect 500,000 tonnes of PET bottles and these bottles are sent for recycling and then for producing polyester fiber.

According to a story in ‘The HINDU’, Rag Pickers collect Rs.13 per kg for mixed plastic items. Lucrative PET bottles fetch Rs.17 per kg and empty milk covers sell at barely Rs.7 per kg.

Around, 50 % of Dharvi exists without any legal sanction and yet Rag Pickers and scrap dealers living in Dharvi are recycling almost 80 percent of Bombay’s waste. However, according to reports by Business Standard and The Better India, a Rag Picker in India who works 12 – 14 hours a day, earns an average of Rs 4500 – 7000 rupees per month.

Many Corporations like the BMC, LMC, Tetra Pak, Dabur, Amul, Parle etc. have taken steps to help Rag Pickers earn their livelihood in a more respectable way by arranging Rag Pickers for waste collection in several cities in our country.

This May, a Rag Picker’s son from Madhya Pradesh’s Dewas district cleared the AIIMS entrance test in his first attempt. Another exception is the story of Bilal Dar, an 18-year-old Rag Picker who earned his living by picking up plastic waste from the Wular Lake in Bandipora district of north Kashmir, who has been appointed brand ambassador of the Srinagar Municipal Corporation (SMC).

Make the life of a Rag Picker a little easy. Throw reusable or recyclable plastic in a separate bin so that it becomes easy to be identified and sent to right place for recycling. Secondly, since these Rag Pickers are important chain in recycling process of plastic, let us be polite to them. Encourage them for continuing education, if you find young children engaged in this process. Who knows, you may be the inspiration behind another professional success.