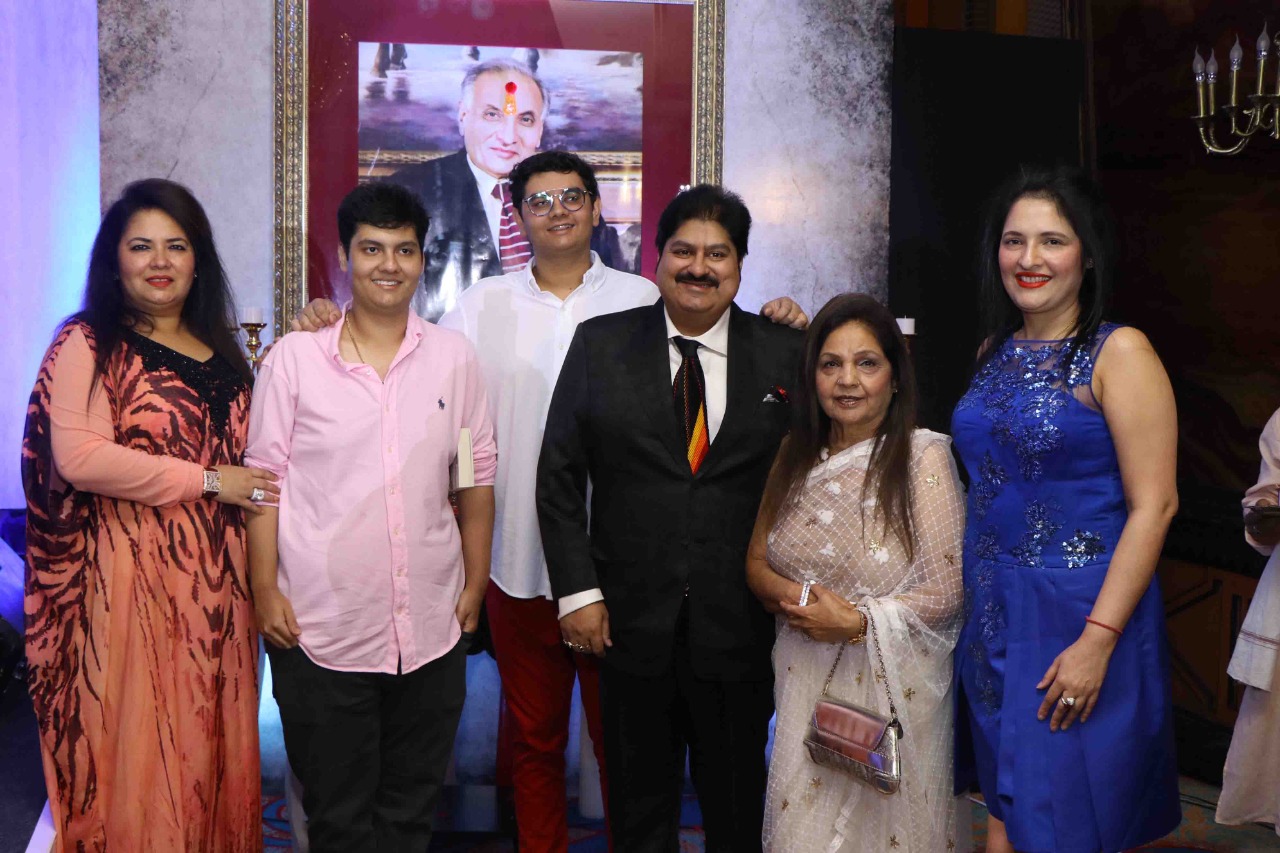 New Delhi : MBD Group, a brand that is synonymous with quality, trust and professionalism be it in Education, EdTech, Hospitality, Real estate, Capacity building, Design, Construction or any of its other verticals, celebrated its 77th Founder’s Day today with zeal and excitement. This day marked the 77th birth anniversary of its visionary founder Shri Ashok Kumar Malhotra – a magnanimous personality, difficult to describe in a few words! It’s Shri Malhotra’s drive for education for all, undying passion for change, and mission to unite the MBD family team members with warmth and oneness.

MBD Group has stood out as a socially responsible brand that has always believed in creating positive engagements with the world around. They have consistently remained active with respect to their Corporate Social Responsibility with an ideology that revolves around making resources available to those in need. The Group drives all CSR initiatives under ‘MY BEST DEEDS’, which is managed by a dedicated volunteer committee and supported by the respective corporate social responsibility champions across multiple verticals on a pan India basis. Moreover, MBD Group, through AKM Charitable Trust, extends its support to projects like “Empowering Girl Child with Education”, “Swachh Bharat Abhiyaan” and much more.

Shri Malhotra was a firm believer in the power and potential of education. He believed there could be no better catalyst than education to bring about the necessary enlightenment and empowerment in society. This belief had driven him to write and self-publish a book called “General Education” at the mere age of thirteen! The book’s authoring turned out to be a life-changing event for him and gave a new push to his vision and dreams. He worked really hard and made his mark in a multitude of arenas like, Publishing, Printing, EdTech, Hospitality, Retail, Real estate, Capacity building, and Design and Construction in not just India but also abroad. However, one thing that distinguished Shri Malhotra from others, and made him earn a lot of respect and appreciation from everyone he met, was his innate desire to give more and share more and bring about prosperity for all . He never stepped back from helping those in need, be it his MBD team or the society at large. He always believed that the will to help others is the key to spreading hope and positivity, and where there is positivity, success comes naturally! and for that reason as per our Founder, MBD also stands for My Best Deeds apart from Moving Beyond Dreams.

The key aim behind commemorating this year’s Founder’s Day was to come together and celebrate the vision of our Founder as one united and happy MBD family.

“Every year, when MBDians come together to remember and reignite the values and belief system laid down by Shri Ashok Kumar Malhotra, my heart swells with pride. In fact, the rate at which MBD Group is achieving milestones, the onward journey is going to be further wholesome and fulfilling. We will re-affirm the promise to follow Malhotra ji’s vision and values, as well as celebrate Founder’s Day with full enthusiasm and grandeur said Mrs. Satish Bala Malhotra, Chairperson, MBD Group.

“We are hopeful that the Founder’s Day celebrations would give a much-needed break to our employees and help them bond stronger as one MBD family encouraging conversations and communication, something we believe we were able to achieve successfully,” said Ms Monica Malhotra Kandhari, Managing Director MBD Group.

Speaking on the occasion, Ms. Sonica Malhotra Kandhari, Joint Managing Director, MBD Group said, “As an organization that’s driven by its people-first vision, the MBD Group cherishes and thrives on personal connections and a sense of belongingness among its employees. Moreover, we have always treasured the aim of giving back to society in whatever way possible. We took this Founder’s Day as a boost to keep marching in the direction of our goals even stronger and with much more vigor as a team,”

MBD Group’s 77th Founder’s Day celebrations would remain incomplete without the mention of the “MBD Got Talent” and “MBD Olympiad,” both of which were announced in early June.

MBD Got Talent was meant to help the MBDians achieve work-life balance and provide them with a platform to showcase their talents and skills outside the spectrum of their job roles and work profiles in activities like dancing, singing, gardening, mimicry, art and craft and much more. The winner was awarded attractive cash prizes. On the other hand, MBD Olympiad was arranged for 6th-8th grade students on 30th June 2022 with the aim to encourage and motivate the young minds to recognize and polish their scientific temperament and analytical reasoning abilities in maths and science MBD olympiad was a huge success with over 20,000 students participating in it .The winner would be awarded .

Since its inception in 1956, MBD Group grew to be the leading publisher by publishing books for all classes, all subjects, major boards, in multiple languages; nationally and internationally. With technological advancements, MBD also kept evolving itself to compliment new age digital publishing and MBD’s digital contents have over 7 million users. In addition, MBD Disha the flagship teacher capacity-building program trains close to 70,000 teachers annually. The group is also the pioneer to introduce AR, VR and Robotics in India. On traditional training front, MBD Skills has been a pioneering initiative in skill development for IT, ITES and hospitality industry. Over 35,000 people have been trained and the target is to provide skill training to 1 million people by 2025.

Aasoka, the personalised learning app of MBD offers high quality study materials to students in the form of e-books, audio lessons, video lessons, online assignment and assessments. The app is driven by the latest research in pedagogy and innovations in teaching methodology to engage students’ attention and curiosity, encouraging and motivating them to study more and learn more. Also, the recently introduced Aasoka Learning and Teaching solutions (ALTS) gives endless opportunities to students to learn effectively and teachers and school management to carry out their responsibilities with ease. The students can access physical books as well.

It was the vision of the Founder Shri Ashok Kumar Malhotra that MBD Group from being an education conglomerate decided to enter the hospitality sector on 21st November 2003 and launching “Radisson Blu MBD Hotel”, the first five-star luxury hotel of Noida. Last year, the hotel completed 18 glorious years of delivering finest hospitality and impeccable services. Throughout its distinguished tenure, the hotel has created new benchmarks and got numerous awards & accolades for its exceptional performance and impeccable hospitality services and become a name to reckon with.

After successful debut in the domain, the Group replicated the success of Radisson Blu MBD Noida by venturing into Ludhiana and launching the first five-star hotel in the city Radisson Blu MBD Ludhiana. Continuing the journey, the Group also became joint venture partners to Germany’s largest hotel Chain Steigenberger with “MBD Zepyhr, Bangalore” being the first Icon Steigenberger in India. With this partnership, the Group embarked on undertaking luxury hotels on management contracts. The Group also launched a path-breaking mid-market brand “MBD Express and also numerous successful F&B brands such as RED, Made in India, The Chocolate Box and much more.

The managing team at MBD Group strongly believes in recognizing the efforts of its team by awarding exceptional performers for their contribution to the Group’s success. This, they say, works as excellent morale-boosting activity. In view of the same, MBDians are recognized and awarded at periodic intervals. During the 77th Founder’s Day, the Group announced some crucial awards under categories like Shri Ashok Kumar Malhotra Employee of the Year Remarkable Contribution Award, ASM of the Year and Branch of the Year etc . Such awards work miraculously in terms of employee productivity, retention, and satisfaction.

The MBD Group is progressing in the direction of success, having completed a 7-decade-long stint in the edutech & education vertical and with its wings spread wide in other spheres like Paper Manufacturing, ICT Infrastructure, Hospitality, Real Estate, and Retail Development, among others. MBD Group has continued to remain an established name in the corporate world with its matchless service levels and an intention to redefine the many elements that form part of our day-to-day life.