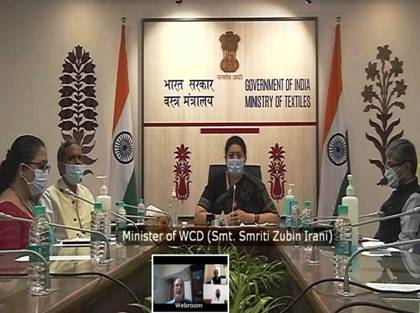 Medicinal gardens will be developed in identified Anganwadi centres; Women and children to get benefit of Yoga classes in AWCs – Smt Smriti Zubin Irani

New  Delhi: The Ministry of Women and Child Development has signed a Memorandum of Understanding (MoU) with the Ministry of Ayurveda, Yoga and Naturopathy, Unani, Siddha and Homoeopathy (AYUSH) to work together to control the menace of malnutrition through integration of AYUSH systems with the ongoing nutrition interventions under the Umbrella ICDS program. The MoU was signed by Shri Ram Mohan Mishra, Secretary, WCD and Vaidya Shri Rajesh Kotecha, in the presence of Smt Smriti Zubin Irani, Union Minister for Women & Child Development and Textiles, and Shri Shripad Yesso Naik, Union Minister of State (Independent Charge), Ministry of AYUSH, who joined the signing ceremony through videoconferencing.

Describing the MoU between the two Ministries as a milestone in the efforts to eradicate malnutrition, Smt Smriti Zubin Irani said that along with the target of having a Nutrigarden in each Anganwadi, medicinal gardens will also be developed in identified Anganwadi centres. Women and children will get the benefit of Yoga classes in AWCs. She expressed optimism that together science and ayurveda will help in achieving optimum nutritional standards among the target groups. Shri Shripad Yesso Naik said that AYUSH practices are deep-rooted in Indian tradition. He expressed appreciation that the Ministry of Women & Child Development and the Ministry of AYUSH have come together with the common objective to eliminate malnutrition and improve the health of people, especially women and children.

Army PROs should connect with common public to earn their…

As part of collaboration, the Ministry of AYUSH would provide support to the beneficiaries of Umbrella ICDS program of the Ministry of Women and Child Development attending Anganwadi Centers. Convergence between MWCD and Ministry of AYUSH will help addressing malnutrition through the principles and practices of Ayurveda, Yoga and other AYUSH systems and provide context specific solutions for holistic well being of Women and Children. While AYUSH would provide technical guidance and support for the implementation of various interventions for addressing malnutrition, including developing nutritious recipes based on regional and climatic preferences, principles & practices under AYUSH systems, Ministry of WCD will enable outreach of AYUSH systems through Anganwadi Centers. Initially, a pilot will be conducted in 1000 Anganwadi Centers each in few States, which can be upscaled later in a phased manner.

The collaborative efforts will also include setting up of Herbal Gardens with live demonstration to beneficiaries how to use them through various home-based preparations. Also, Yoga sessions in the Anganwadi Centers would be conducted.

Army PROs should connect with common public to earn their faith in Defence: Lt Gen…

Delegation of PHD-Chambers of Commerce & Industry Kashmir call on…