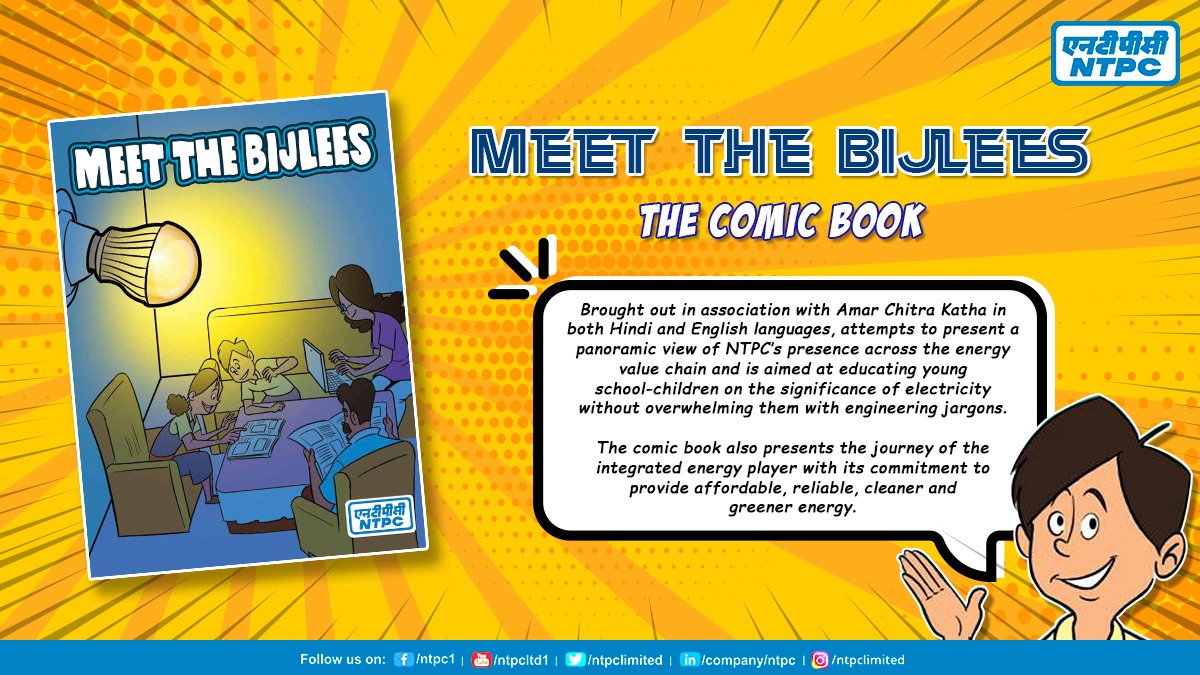 ‘Meet The Bijlees’ by NTPC: an extensive guide for schoolkids, to know all about electricity

Mumbai: Meet The Bijlees, the comic book from NTPC, brought out in association with Amar Chitra Katha in both Hindi and English languages, attempts to present a panoramic view of NTPC’s presence across the energy value chain and is aimed at educating young school-children on the significance of electricity without overwhelming them with engineering jargons.

The comic book also presents the journey of the integrated energy player with its commitment to provide affordable, reliable, cleaner and greener energy.

NTPC Ltd, one of India’s largest integrated energy player, has taken the comics route to raise awareness on the importance of using the resource judiciously, to children in their early school years.

TCS iON Announces Winners of the 4th Edition of its…

The story navigates along with the conversation between siblings Tanu and Manu and their parents who are associated with the power industry. Throughout the comic book, NTPC elucidates the transmission of electricity from power plants to the grids and then to the households.

All in all, the book provides an interesting platform to capture the children’s attention to a complex but interesting subject and imparts knowledge about not only electricity generation but also its safety aspects which is of practical use in our everyday lives, thereby making it far more pertinent for the younger lot.

Meet The Bijlees also enlightens us about non-renewable sources of energy like coal, oil and gas which is limited in quantity and highlights the skewed supply-demand ratio.

The last part of the comic briefs us about NTPC’s initiatives to produce 30% of its energy with the help of non-fossil fuels by 2032. The comic also focuses on the company’s concern about the environment and informs the readers about the power major’s goal to plant over 34 million trees in and around its power stations and its massive drives to save electricity every year. The comic also highlights NTPC’s collaboration with Ola, and Zoomcar to diversify the electric charging infrastructure across the country and the power major’s road map in bringing about the electric vehicle revolution in India.