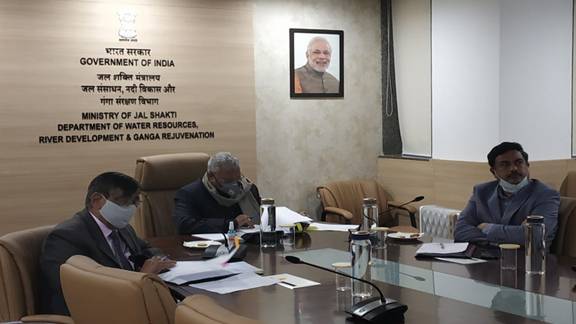 New Delhi: Minister of State for Jal Shakti Shri Rattan Lal Kataria today chaired the 34th Annual General Meeting of the National Water Development Agency (NWDA) Society and 18th Meeting of the Special Committee for Interlinking of Rivers (SCILR) through video conference. The meeting was attended by the Ministers of Water resources/Jal Shakti Department of the States of Uttar Pradesh, Madhya Pradesh, Bihar &Rajasthan along with Secretary, DoWR, RD & GR, Chairman, Task Force on ILR and Advisor to Union Minister, Jal Shakti and other officials from various Central and State Government organisations.

The Minister of State for Jal Shakti stressed,during the meeting, that the Interlinking of Rivers Programme is very important for enhancing water and food security of the country and would be very helpful in providing water to water scarce, drought prone and rain-fed farming areas. He affirmed that the Government of India is committed for Implementation of ILR Programme with consensus and co-operation of the concerned State Governments. Shri Kataria remembered former Prime Minister Shri Atal Bihari Vajpayee on the occasion and said that this project was his vision, dream and very dear to him personally.

Shri Kataria briefed everyone about the progress that has been made by NWDA in preparations of DPRs of 5 major link projects and PFRs/FRs of various projects pertaining to inter-linking of inter-state and intra-state rivers. He mentioned that most of the clearances for Ken – Betwa link project are accorded and DPRs have already been shared with the States of MP and UP. Some minor decisions like consensus on water sharing during the lean season among UP and MP are pending and affirmed that soon with consultation and cooperation, they shall be addressed. Similarly, the water sharing in Par – Tapi – Narmada link project is also under discussion. The Minister urged cooperation and assistance of all members especially the concerned State Governments for the successful implementation of Interlinking of Rivers Programme.

Shri Kataria apprised that the Ministry has already accorded investment clearance worth Rs 4,900 Crores to the Kosi – Mechi link project which shall be a major lease of life to Bihar’s Seemanchal region. It shall relieve large swathes of North Bihar from Menace of floods but also provide irrigation for a whopping over 2.14 lac hectares of command area.

The Minister of State for Jal Shakti assured that all the concerns raised by States on various ILR projects will be addressed and hoped that ILR programme shall be taken forward with cooperation of all States concerned.

During the meeting, a detailed presentation on agenda items was made by Director General, NWDA and the status of ILR projects and the pending issues/bottle necks/etc., were discussed at length with the concerned representatives of Centre and State Governments. Shri Vijay Kumar Chaudhari, Minister of WRD, Bihar, Dr.Mahendra Singh, Minister of Jal Shakti, Uttar Pradesh, Shri Ram KishorKawre, Minister of State WRD, Madhya Pradesh and Shri Udai Lal Anjana, Minister of IGNP, Rajasthan also expressed their views on the ILR projects.

Research could lead to step-change in NHS hearing aid provision