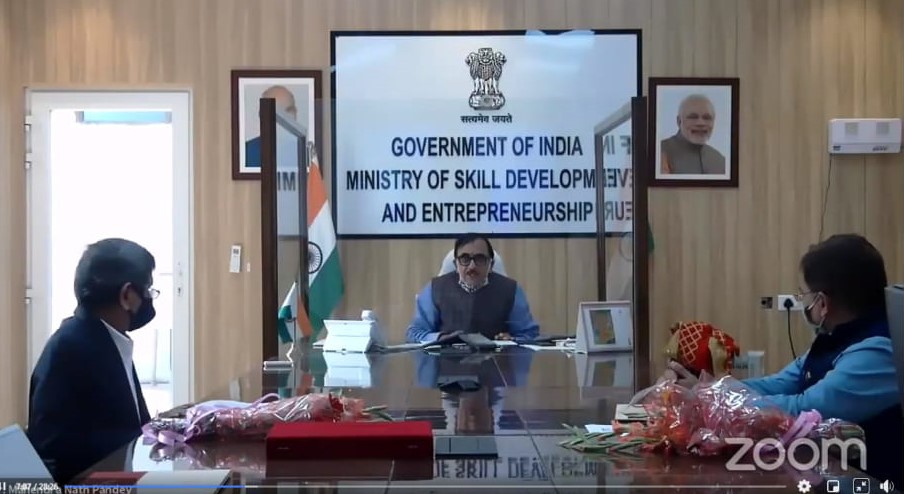 Jaipur: Prabhu Dayal Agarwal, Founder of Transport Corporation of India (TCI) who was a born leader and a philanthropist led his life contributing to the betterment of the society. Shri P.D. Agarwal has been honored for his contributions on his 100th birth anniversary by the unveiling of a stamp by Dr. Mahendra Nath Pandey, Minister of Skill Development & Entrepreneurship on a virtual platform today. The Customized My Stamp & Special Cover was unveiled by Dushyant Mudgal, Director Postal Services from the Department of Posts, along with other dignitaries from Transport Corporation of India (TCI), including Mr. D. P Agarwal, Chairman & Managing Director, TCI, Sh. Pramod Jain, MLA, Rajasthan, Mr. Vineet Agarwal, Managing Director of TCI, Mr. Chander Agarwal, Managing Director, TCI Express Ltd. were present during this occasion.
Dr. Mahendra Nath Pandey, “Shri P.D. Agarwal was not an entrepreneur or a founder of an organisation, but was always a social enterprise himself, who had always been focused to connect with the people of his soil. He would do anything in his capability to do good for the needy or for the betterment of the country. Late Shri Prabhu Dayal Agarwal founded the largest and most admired transportation company – Transport Corporation of India (TCI). The organisation had laid a foundation to connect the remotest parts of the country in India. The journey that was started by Late Shri P.D Agarwal started from Kolkata, then reached the whole of India and now the organisation due to his efforts is globally acclaimed. Late Shri PD Agarwal always focused on empowerment through education and social wellbeing of the people of his soil.” Dr. Mahendra thanked the TCI family for inviting him on the celebration of great Mr. PD Agarwal’s 100th birth ceremony and giving him this opportunity to unveil the customised stamp.
Dushyant Mudgal, Director Postal Services, said, “I am extremely thankful to be invited at the celebration of 100th birth anniversary of the man whose ideals and vision have always been the continuous source of inspiration. Late Shri PD Agarwal ji believed life is a one last opportunity to be good to do well to others. PDji was prudential in creating a transportation structure a customer centric. Because of his giving and kind nature towards everyone it made people from all corners to Join TCI. He took active participation in many social and philanthropic activities for common good. Mr. Agarwal was also associated with various Chambers of Commerce including CII, FICCI, ASSOCHAM & PHDCCI, where he was always appreciated for being the kind of a gem of a person. During his more than 52 years of corporate life he had been contributing towards developing the unorganized logistics sector into an organized one by ensuring that nobody suffered because of any controllable action.”
Considering the contributions of Late Shri PD Agarwal on Health, Education and the vision to facilitate the people of his soil with the best healthcare facilities, his son Dr. Ashok Agarwal, Founded India Institute of Health Management & Research (IIHMR) in 1984 following his father’s footsteps. The IIHMR group comprising of IIHMR University, Jaipur, IIHMR Delhi and IIHMR Bangalore is considered as one of the best institutions of the country engaged in management research, postgraduate education and training in the health, pharmaceutical and development sectors.