Eddies are often seen as the weather of the ocean. Like large-scale circulations in the atmosphere, eddies swirl through the ocean as slow-moving sea cyclones, sweeping up nutrients and heat, and transporting them around the world.

In most oceans, eddies are observed at every depth and are stronger at the surface. But since the 1970s, researchers have observed a peculiar pattern in the Arctic: In the summer, Arctic eddies resemble their counterparts in other oceans, popping up throughout the water column. However, with the return of winter ice, Arctic waters go quiet, and eddies are nowhere to be found in the first 50 meters beneath the ice. Meanwhile, deeper layers continue to stir up eddies, unaffected by the abrupt change in shallower waters.

This seasonal turn in Arctic eddy activity has puzzled scientists for decades. Now an MIT team has an explanation. In a paper published today in the Journal of Physical Oceanography, the researchers show that the main ingredients for driving eddy behavior in the Arctic are ice friction and ocean stratification.

By modeling the physics of the ocean, they found that wintertime ice acts as a frictional brake, slowing surface waters and preventing them from speeding into turbulent eddies. This effect only goes so deep; between 50 and 300 meters deep, the researchers found, the ocean’s salty, denser layers act to insulate water from frictional effects, allowing eddies to swirl year-round.

The results highlight a new connection between eddy activity, Arctic ice, and ocean stratification, that can now be factored into climate models to produce more accurate predictions of Arctic evolution with climate change.

“As the Arctic warms up, this dissipation mechanism for eddies, i.e. the presence of ice, will go away, because the ice won’t be there in summer and will be more mobile in the winter,” says John Marshall, professor of oceanography at MIT. “So what we expect to see moving into the future is an Arctic that is much more vigorously unstable, and that has implications for the large-scale dynamics of the Arctic system.”

For their study, the researchers assembled data on Arctic ocean activity that were made available by the Woods Hole Oceanographic Institution. The data were collected between 2003 and 2018, from sensors measuring the velocity of the water at different depths throughout the water column.

The team averaged the data to produce a time series to produce a typical year of the Arctic Ocean’s velocities with depth. From these observations, a clear seasonal trend emerged: During the summer months with very little ice cover, they saw high velocities and more eddy activity at all depths of the ocean. In the winter, as ice grew and increased in thickness, shallow waters ground to a halt, and eddies disappeared, whereas deeper waters continued to show high-velocity activity.

“In most of the ocean, these eddies extend all the way to the surface,” Marshall says. “But in the Arctic winter, we find that eddies are kind of living beneath the surface, like submarines hanging out at depth, and they don’t get all the way up to the surface.”

To see what might be causing this curious seasonal change in eddy activity, the researchers carried out a “baroclinic instability analysis.” This model uses a set of equations describing the physics of the ocean, and determines how instabilities, such as weather systems in the atmosphere and eddies in the ocean, evolve under given conditions. 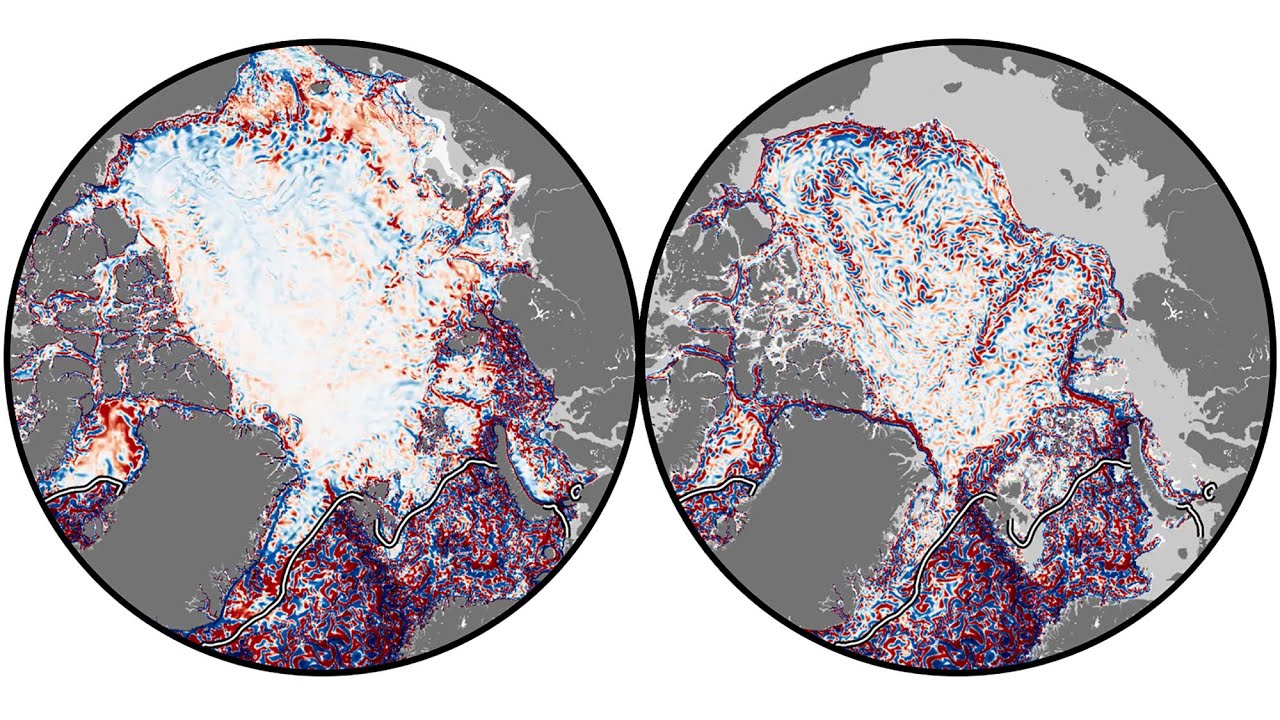 The researchers plugged various conditions into the model, and for each condition they introduced small perturbations similar to ripples from surface winds or a passing boat, at various ocean depths. They then ran the model forward to see whether the perturbations would evolve into larger, faster eddies.

The researchers found that when they plugged in both the frictional effect of sea ice and the effect of stratification, as in the varying density layers of the Arctic waters, the model produced water velocities that matched what the researchers initially saw in actual observations. That is, they saw that without friction from ice, eddies formed freely at all ocean depths. With increasing friction and ice thickness, waters slowed and eddies disappeared in the ocean’s first 50 meters. Below this boundary, where the water’s density, i.e. its stratification, changes dramatically, eddies continued to swirl.

When they plugged in other initial conditions, such as a stratification that was less representative of the real Arctic ocean, the model’s results were a weaker match with observations.

“We’re the first to put forward a simple explanation for what we’re seeing, which is that subsurface eddies remain vigorous all year round, and surface eddies, as soon as ice is around, get rubbed out because of frictional effects,” Marshall explains.

Now that they have confirmed that ice friction and stratification have an effect on Arctic eddies, the researchers speculate that this relationship will have a large impact on shaping the Arctic in the next few decades. There have been other studies showing that summertime Arctic ice, already receding faster year by year, will completely disappear by the year 2050. With less ice, waters will be free to swirl up into eddies, at the surface and at depth. Increased eddy activity in the summer could bring in heat from other parts of the world, further warming the Arctic.

At the same time, the wintertime Arctic will be ice covered for the foreseeable future, notes Meneghello. Whether a warming Arctic will result in more ocean turbulence throughout the year or in a stronger variability over the seasons will depend on sea ice’s strength.

Regardless, “if we move into a world where there is no ice at all in the summer and weaker ice during winter, the eddy activity will increase,” Meneghello says. “That has important implications for things moving around in the water, like tracers and nutrients and heat, and feedback on the ice itself.”

This research is supported, in part, by the National Science Foundation.

MIT to share in $3.2 million grant to create a statewide technician-training program in advanced manufacturing

University of Bristol: Muscular study provides new information about how the largest…

University of Exeter: New play co-created with people living in the South West…

iednewsdesk Jan 20, 2022
Mistreatment and marginalisation from society has meant LGBTQIA+ communities have created their own spaces for…