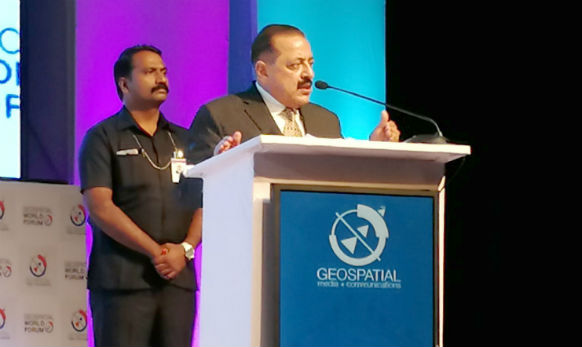 New Delhi: Union Minister of State (Independent Charge) for Development of North Eastern Region (DoNER), MoS PMO, Personnel, Public Grievances, Pensions, Atomic Energy and Space, Dr Jitendra Singh delivered the Keynote address at the International Space Conference of “Geospatial World Forum” in Hyderabad today. Addressing the conference he complemented Team ISRO for having placed India as a front-line leader in the community of world nations while in the last three years, the use of diverse applications of space technology to carry forward the Modi Government’s infrastructural and transformational programmes has brought space technology to the doorstep of every Indian household.

The minister said that it is primarily the personal indulgence, intervention and patronage provided by Prime Minister Shri Narendra Modi which has made space technology an essential part of Modi’s “Transforming India” mission, which will finally culminate in the building of “New India”. It was at the behest of Prime Minister that perhaps, the first-of-its-kind, extended brain-storming interaction was held between space scientists and the representatives of different Ministries and Departments in Government of India, in order to understand the areas where space technology could be put into use.

In the last 3 years, Dr Jitendra Singh said, the Team ISRO and the Department of Space have finalised effective MoUs with a host of Ministries, including Ministry of Railways, Ministry of Urban Development, Ministry of Agriculture, Ministry of Human Resource Development, Ministry of Health and Family Welfare etc. Space Technology today is playing a crucial role in carrying forward a number of flagship programmes of the Modi Government, including Smart City programme, Urban and Housing schemes, guarding of unmanned railway crossings, Geo-tagging of MNREGA, procurement of Utilization Certificates of roads and other projects, agricultural soil testing, he added.

The new year began with the January 12th launching of 28 foreign satellites which, Dr Jitendra Singh said, has vindicated the dream of our founding father Vikram Sarabhai and evidently proved that even those nations of the world which began their space programme several years before us have reposed their faith and trust in us to launch their satellites. The last year set some world records like launching of 104 satellites in a single go, launching of South Asia satellite and completion of 3 years of Mangalyaan in the orbit, he added.

Referring to the Geospatial World Forum meet, currently being held, Dr Jitendra Singh said, this event highlights India’s intent of expanding its space programmes for wider application and with wider participation of other partners as well. The presence of representatives and CEOs of some of the leading industrial houses of the world, he said, signifies the keen desire of the world industrial players to collaborate with India to benefit as well as to supplement the applications of space technology for the common goal of the future growth of a global world.