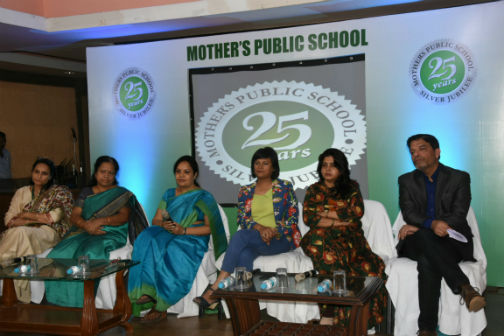 Bhubaneswar: Mother’s Public School, one of the oldest school sin Bhubaneswar, celebrated its Silver Jubilee – 25 years of service to the children of the community. For last few months, from July to December, various events were held to celebrate this landmark in the journey of the school, its students and parents.
The Silver Jubilee Logo, school merchandise and a commemorative postage stamp with special cover were inaugurated on 17th July ‘17. Various events and Inter-school competitions were held which included School Cinema Screening, Inter-school Short Play competition, Inter-school Quiz competition, Inter-school Science Exhibition and Inter-school Rock Band competitions. Students from Schools all over Bhubaneswar participated in the events. Mr. Syed Sultan Ahmed, Managing Director, Edumedia India and the founder of School Cinema visited the school and interacted with the students. He also judged the entries for an inter-school short movie competition in which several schools from all over the country participated.
The Entrepreneurship Project Competition which was held on 8th Nov was judged by Mr. Jayanarayan Pujapanda, founder of Paris Bakery and Mr. Nilamadhav Panda of Synergy Medicare (Health) Pvt. Ltd. Mr. Subrato Bagchi presided as the Chief Guest and delivered a motivating speech to the students.
A three day closing ceremony culminated with a grand evening on the 23rd of December which was witness by His Excellency Mr. S.C Jamir, the Governor of Odisha, as the chief guest, along with other renowned dignitaries. A coffee table book, chronicling the school’s journey, was released. Mr. S.C Jamir expressed his gratitude by appreciating the enthusiasm of all the students who participated in every competition and congratulated the school for completing 25 years.

PetrSU teachers at the “Teacher of the Year – 2021” competition

India Education Diary Bureau Admin Apr 15, 2021
On April 13, the municipal stage of the "Teacher of the Year - 2021" competition took place in Pryazh. The jury…