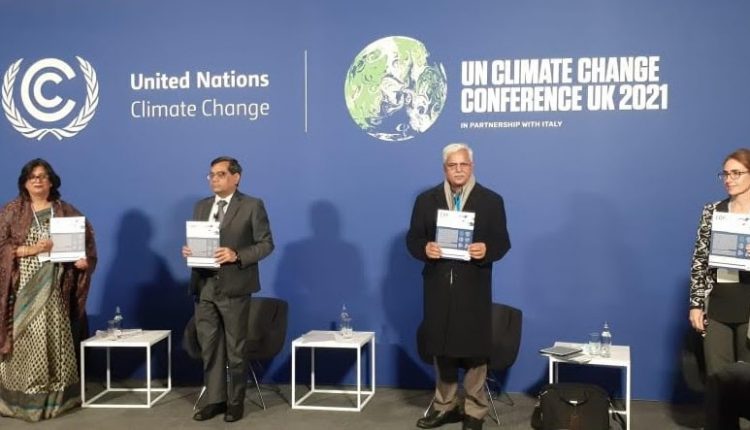 Glasgow: “Discussions on climate action must start with those people and areas which are going to have greatest of the impact from climate change,” said Mr. Rameshwar Prasad Gupta, Secretary, Ministry of Environment, Forest and Climate Change, Government of India, during the launch of “COP26 Charter of Actions” at the 26th Conference of the Parties (COP26) under the United Nations Framework Convention on Climate Change (UNFCCC) at an official UNFCCC side event titled, “Beyond Climate Neutrality: Using Long-term Strategies (LTS) to Chart an Equitable Path for a Resilient Planet” in Glasgow. Held on November 6, 2021 the event was organized by The Energy and Resources Institute (TERI) and TERI School of Advanced Studies in collaboration with the German Advisory Council on Global Change (WBGU), Warsaw Institute for Economic and European Studies Foundation (WiseEuropa), and Ecologic Institute.

In his keynote address, Mr. Gupta emphasized the importance of adaptation finance and adaptation action wherein countries and communities must be helped through a definite negotiated agenda. Underscoring that even if the world reaches carbon neutrality, extreme events due to climate change will be much more severe and more frequent, he highlighted that, “We also have to think of a mechanism for compensating those people and the communities who are going to be impacted and who are going to suffer the losses.” Emphasizing that equity and climate justice has to play an important role in any global climate action, Mr. Gupta reiterated that, “Equitable carbon and development space before reaching carbon neutrality to achieve sustainable development must be based on the principles of common, but differentiated responsibilities and respective capabilities.”

Inaugurating the event and welcoming the distinguished guests, Dr. Vibha Dhawan, Director General, TERI, highlighted, “To reach climate stabilization, it is crucial that countries develop long-term visions, goals, and strategic guidelines for climate policy, embedded in the wider sustainability agenda.” She also said that “Issues emanating from the COP26 discussions and the Charter would culminate in a review at a plenary session at the World Sustainable Development Summit 2022, which would assess the efforts of international climate negotiations in securing a sustainable future, and deliberate on future actions.”

The launch was followed by three presentations by Dr. Shailly Kedia, TERI on ‘COP26 Charter of Actions’, Prof. Karen Pittel, WBGU on ‘Beyond Climate Neutrality’, as well as Mr. Aleksander Sniegocki, on behalf of WiseEuropa and Ecologic Institute on ‘Lessons Learned and Outlook for National LTS Process in the EU Member States’.

“Out of the 31 LTS documents communicated to UNFCCC ahead of COP26 as per the provisions of Article 4.19, 86% have a weak focus on Adaptation. While formulating and communication of LTS is important, developing countries should in this regard play a key role in tabling proposals for a more concrete agenda on Adaptation,” underscored Dr. Kedia at the session, while giving a presentation on the COP26 Charter of Actions and presenting the key messages from the Charter.

Moderating the session, Mr. R. R. Rashmi, Distinguished Fellow, TERI, emphasized that any climate action need to take care of the larger interest of humanity, which includes not just carbon emission reduction, but reducing adverse climate change, improving the capability of the communities and societies to adapt to climate change, and be resilient to withstand the adverse effects. Dr. Marta Torres-Gunfaus, IDDRI, who was a guest speaker, emphasized that the process of developing long-term strategies is important because it helps in understanding the complexities including trade-offs concerning long-term goals.

Global discussions are important but the real arena for climate action is at the national and sub-national levels and also in business & industry. It is essential that climate action be understood in sectoral terms as well as cross-sectoral terms including in areas of finance as well as innovation. The Charter examines the themes of equity, green finance, adaptation, nature-based solutions, energy, transport, and business actions. The approach for preparing the Charter includes descriptive analysis and stakeholder consultations. The Charter examines the themes in the context of India and in the process, distils messages for the global community for COP26 and beyond. Some of the key messages from the Charter are:

India’s approach has to be rooted in equity, climate justice and principles of United Nations Convention on Climate Change. It is imperative that the progress made by countries is assessed considering the principles of equity and duly incorporating adaptation, climate finance and technology transfer before the global stocktake that is to take place at COP28 in 2023.

Adaptation has to be integral for a global response to climate change in the short, medium and long term timeframes as recognized under Article 7 of the Paris Climate Agreement. However, long-term strategies (LTS) formulated and communicated under Article 4.19 of the Paris Agreement, at the moment, largely focus on mitigation and do not consider adequately adaptation to climate change. Long-term strategies also need to factor climate finance, technology transfer and in-situ and ex-situ adaptation measures along with sustainable consumption.

Short, medium and long term strategies at the global level must focus on sustainable lifestyles and consumption. There is a need to further strengthen alignment with SDG 12 along with concrete measures such as responsible advertising, eco-labels and awareness.

Revised NDC pledges and net-zero commitments by few countries give a glimmer of hope to realize the Paris goals. A higher level of ambition is needed from developed countries, who should move towards being net-negative by 2050 and will need to achieve net-zero much earlier.

India has low per capita emissions but will be an important player for mitigation efforts. It should show normative and entrepreneurial leadership when it comes to mobilizing national and international climate actions.

Issues emanating from the COP26 discussions and the Charter would culminate in a review at a plenary session at the World Sustainable Development Summit 2022, which would assess the efforts of international climate negotiations in securing a sustainable future, and deliberate on future actions. The Charter activities are supported by the British High Commission, Bloomberg Philanthropies, Shakti Sustainable Energy Foundation and Tata Cleantech Capital, and held under the aegis of TERI’s flagship track-II initiative, the World Sustainable Development Summit (WSDS).

University of Cape Town: Harnessing the sun and the (surface of) water to make energy