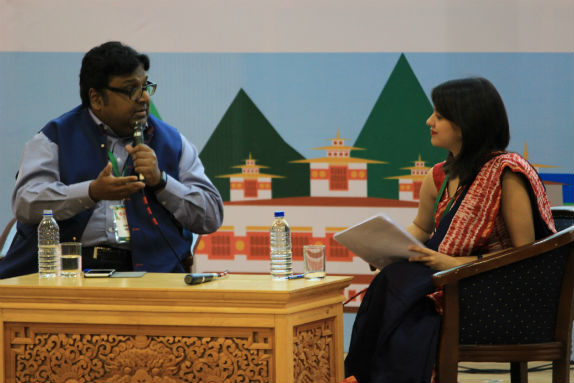 Report by Rashmi Ranjan Parida; Thimph: Thimphu came alive today as the Mountain Echoes Literary Festival commenced with a stellar line-up of speakers and engaging sessions on Spirituality and Buddhism, Writing, Magic and Mentalism, and Fashion.

With an aim to celebrate Untouched Beauty, Unexplored Ideas and Unstoppable Voices from the heart of the happiest country in the world, Day One began with a welcome address by Festival Co-Director Pramod Kumar KG, followed by a performance of Drametse Ngacham, Bhutan’s traditional dance of the drums, a sacred performance in honour of the 8th century Buddhist master, Padmasambhava.

The traditional dance saw sixteen masked male dancers and ten musicians represent the revered deities as they performed to a symphony of cymbals, trumpets and drums. As per tradition, the enthralling performance was divided into two parts, a calm, contemplative part to represent the peaceful deities, and a rapid, athletic part for the wrathful ones.

Audiences at the Royal University of Bhutan were taken on a journey through the tales that have shaped Bhutan’s cultural and spiritual history. Tales of the Zhabdrung, the revered founder of the Bhutanese state and creator of Bhutan’s spiritual and temporal laws, took center stage in a conversation between Her Majesty the Royal Queen Mother Ashi Dorji Wangmo Wangchuck, the Royal Patron of the Festival and Khenpo Sonam Bumdhen, senior scholar and secretary of monastic education at Bhutan’s central monastic body, Zhung Dratshang. The session, ‘The Legacy of Zhabdrung: The Spiritual and The Temporal’, discussed the continued presence of the spiritual leader in every aspect of Bhutanese life in the past four centuries. 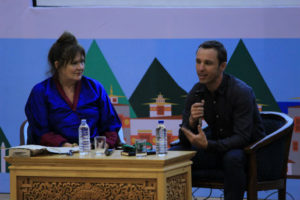 ‘The Karma of Writing’, a conversation between Ashwin Sanghi, one of India’s most celebrated contemporary authors, and Mohini Gupta, programme lead at the Vedica Scholars Programme for Women, brought forth the role played by mythology and ancient literature in shaping new independent genres of writing. During the session, Ashwin also shared his take on the difference between mythology and religion, what makes a successful writer and how he believes that a good story needs to be told, regardless of the language.

‘Set Free’ saw Emma Slade, Founder of the U.K. charity Opening Your Heart to Bhutan, speak to Michael Rutland, Bhutan’s premier British Honorary Consul, about the events that led to her inspiring mission aimed at changing the lives of Bhutan’s specially abled children.

The next session for the day, ‘I’ve Got Magic’ decoded illusionist Neel Madhav’s fascinating journey through the complex maze of magic, mentalism, neurolinguistics and criminology.

Union Minister of Home and Cooperation Amit Shah will…

Celebrated Bhutanese writer Pawo Choyning Dorji, led a session ‘The Turquoise Heart: A Bhutanese Remembers A Bhutanese’, where he spoke to audiences about the significance of Bhutan’s pre-eminent tertön, Pema Lingpa.

In ‘Neighbours: Himalayan Perspectives’, unstoppable voices from across the subcontinent united to discuss social development, transitions and connectivity across India, Bhutan, Nepal and Bangladesh. The power-packed session saw K Anis Ahmed, co-founder of the literary journal Bengal Lights and author of the best-selling novels The World in My Hands and Good Night, Mr. Kissinger; Sujeev Shakya, CEO of Beed Management and chair of Nepal Economic Forum; Indian Diplomat TCA Raghavan and Tenzing Lamsang, investigative journalist and editor of ‘The Bhutanese’ newspaper in conversation with eminent Indian journalist Jyoti Malhotra.

Markus Zusak, the force behind the internationally acclaimed novel ‘The Book Thief’, unraveled the thought processes that help create unconventional characters, stories within stories and best-selling books. In conversation with author Linda Leaming, he led audiences through his journey as a writer and what inspires him every day. In association with the Australia Council for Arts, the session saw stimulating conversations on gripping the readers’ minds through captivating storytelling techniques. The author also threw light on the rigorous technicalities that went into adapting the book to screen.

11-year-old Yeshi Tsheyang Zam launched her book, Khakey, in front of a packed audience at the Royal University of Bhutan. Unveiled by artist, illustrator and animation filmmaker, Chand Bhattarai, Khakey is an illustrated tale of a western Bhutanese custom of children discreetly delivering snowballs filled with delicacies to a neighbour’s house on the first snow day of the year.

Day One ended on a high note with the ‘On The Ramp’ session, which saw renowned Bhutanese fashion designers Chandrika Tamang and Chimmi Choden and acclaimed Indian designer duo Abraham & Thakore provide audiences with interesting insights into Bhutan and India’s historical and traditional narratives. Complemented by Malika Kashyap, founder of digital publication and creative agency Border & Fall, and fashion consultant Prasad Bidapa, the eminent panel used the two countries’ shared heritage of hand weaving and textiles to build a common thread between them. They also brought forth the portrayal of fashion in mainstream and social media; and highlighted intriguing aspects of the fashion industry.

At the Tarayana Centre, the inaugural session ‘Show and Tell’ explored storytelling through sign language with Sonam Choden, Sushila Gurung and students from the Wangsel Institute. Tess Lewis and Mohini Gupta looked at the art of literary translation in ‘Reading Between The Lines’.

Acclaimed Indian author and Sahitya Akademi award winner Jerry Pinto led the session, ‘How Well Do You Know Your Mom?’ He set the 120-odd students a seemingly simple task of writing five facts about their mother, and used the answers to question how we think and write about women and the world.

The evening ended on a power-packed performance by Sangay Lhaden, one of Bhutan’s most popular singers, at the Royal University of Bhutan.

Set against the stunning backdrop of the Eastern Himalayas, Mountain Echoes literary festival is an initiative of the India-Bhutan Foundation, in association with India’s leading literary consultancy, Siyahi. Presented by the Jaypee Group and powered by the Department of Tourism, Government of Rajasthan, the three-day festival is on till August, with engaging and insightful discussions being held across six locations in the city.

National Science, Math and Environment Exhibition to be held in Bhopal