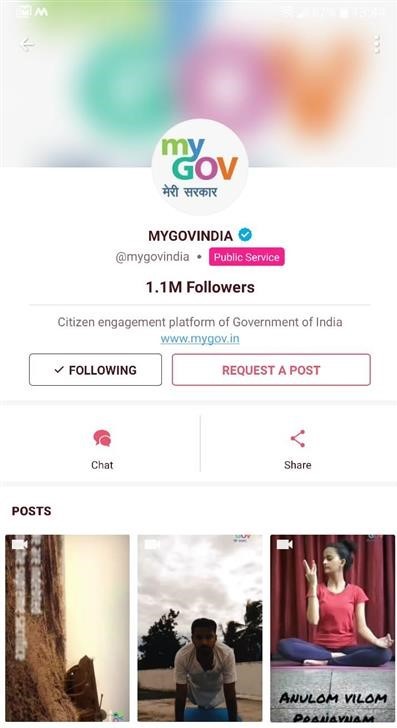 “It has been the endeavour of MyGov India to act as a bridge between citizens and the Government and enable citizen participation and information dissemination on all platforms, including the immensely popular Indian platforms like Roposo. MyGov India’s presence on Roposo has greatly helped expand our outreach and engagement related to Covid19, especially with regional audiences,” said Abhishek Singh, CEO of MyGov. “It has been the endeavour of MyGov to help support and achieve Hon’ble PMs #AatmaNirbharBharatAbhiyaan, and we are happy to be on Roposo, a Made In India social media platform. #TogetherWeCan”

“Roposo enables Indian users to access communities that they can identify and interact with, in their mother tongue. MyGov joining Roposo is a testament to the power and reach of our platform in India, said Glance VP and Founder of Roposo, Mayank Bhangadia. “We are ecstatic that the wheels of #AatmanirbharBharatAbhiyaan are now in motion, and we feel extremely privileged to be part of this movement. I am certain that MyGov will lead the way for other government organizations to support Vocal for Local by embracing Indian platforms.”

Roposo has witnessed a massive increase in user adoption and engagement on its platform. Users are spending more than 30 minutes per day on the app, with more than 1.5 lac users creating 5 lac videos daily. With a 4.6 rating on the official Google Play Store, Roposo has also been trending at No. 1 on Google Play Store in the social category.