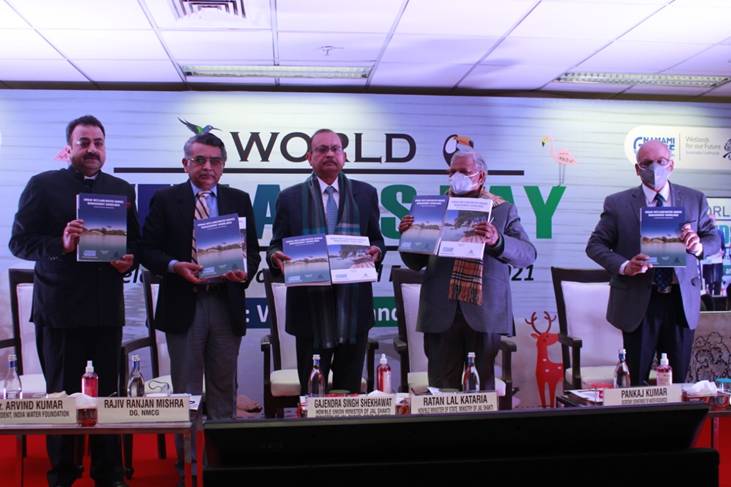 This year’s World Wetland Day theme shines a spotlight on wetlands as a source of freshwater and encourages actions to restore them and stop their loss. Highlighting the interconnectedness of all water bodies and their role in maintaining each other’s Aviralta (e-flow) and Nirmalta (cleanliness), Shri Gajendra Singh Shekhawat, Minister of Jal Shakti said, “NamamiGange is the first of its kind program where Wetland Conservation is integrated with Basin Management Plan.” He added, “The innovative work done by NMCG for wetland conservation linked to River Rejuvenation would help the entire country as a model framework”. He said that all stakeholders have to act as custodians of the environment for creating a sustainable future. On the occasion of Wetland Day, a massive scientific and community-based program to develop Health card and management of 10 wetlands in each of the 50 plus Ganga districts was launched.

Shri Rattan Lal Kataria, MoS Jal Shakti Ministry while emphasising the integral role of wetlands in the socio-ecological system said, “Wetlands are very important for maintaining the country’s biological diversity.” He said that a lot of information is available on wetlands, regulatory frame work is also present, but there is a need to strengthen them at the grassroots level and raise awareness among the people. Speaking about role of wetlands in addressing various environmental issues, Mr. Atul Bagai, Head India Country Office, UNEP said, “We need to see how wetlands can be useful to address the issues of desertification and migratory species. We hope in regards to wetlands conservation, India will again show the leadership that it has shown in a lot of other areas.”

Shri Pankaj Kumar, Secretary of Jal Shakti, while sharing that the awareness about wetlands has heightened in recent times said, “NMCG not only looks at rejuvenation of Ganga but the overall river basin including its cities and their wetlands.” He said that events like World Wetland Day encourage us to continue this holistic approach. Shri Rajiv Ranjan Mishra, Director General, NMCG added that, “This is not just a celebration but a call for action to conserve wetlands and that is why we haveorganised capacity building workshops for wetland conservation.” Mr. Mishra shared that a futuristic guideline for monitoring of Ramsar sites and wetlands through Wildlife Institute of India and support of MoEFCC is being developed. Dr Arvind Kumar, President, India Water Foundation,shared that this year commemorates the 50th anniversary of the Ramsar Convention and by now India has around 42 Ramsar sites. He suggested encouraging cooperation among several ministries to further scale up wetland conservation.

The works of Wetlands are widely known, although when it comes to maintaining these functions, municipalities lack knowledge. An innovative attempt to develop Guidelines for protection and conservation of Urban Wetlands by NMCG with the help of the prestigious School of Planning and Architecture in the form of a toolkit called, ‘Urban wetlands/water body management guideline – a toolkit for local stakeholders’ was released at the event. ‘Framework for Ecological Monitoring of Ramsar Sites and Other Wetlands in India’ was also released. The Wetland Quiz, received enthusiastic participation throughout India and winners were announced by Ms.BhawnaBadola, CEO, Tree Craze Foundation during the function. Posters for spreading awareness on wetlands by WWF-India were unveiled by the Minister and MoS, Jal Shakti.

Wetland Day celebrations kickstarted on 1st February, 2021 with a series of workshops on various aspects of wetland rejuvenation and conservation designed by WWF-India in association with NMCG for District Ganga Committees. Similar capacity building workshops in association with Wildlife Institute of India (WII) will be organized on 3rd February 2021 for Ganga Praharis, Ganga Doots, Ganga VicharManch, Professors, teachers and students by Wildlife Institute of India.

Numerous programs were organised by volunteers and independent organisations in the Ganga Basin to engage with communities and sensitize them towards wetlands which includes events at AsanConservation Reserve, Jhilmil Jheel Conservation Reserve etc. DG, NMCG expressed satisfaction that activities at the community level are taking place at hundreds of places along the Ganga.

iednewsdesk Sep 21, 2021
Representatives of the General Consulate of the Republic of Korea in Irkutsk visited TSU recently. Shin Kyuho,…