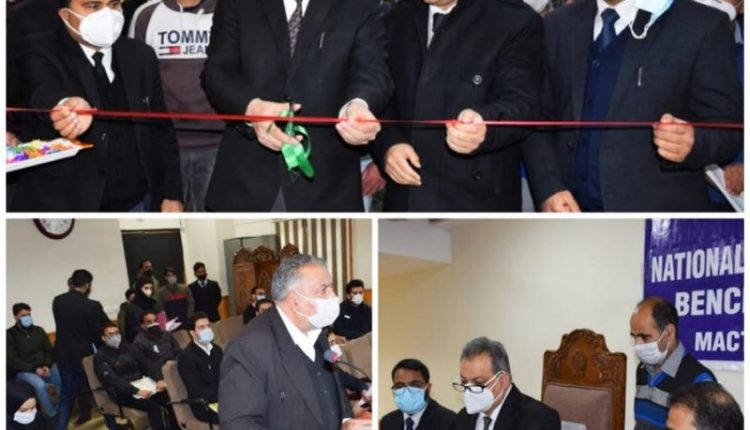 Srinagar: In pursuance to the directions of National Legal Services Authority, the National Lok Adalat was today conducted at Srinagar, Ganderbal, Shopian, Kulgam and Kupwara districts of Kashmir division.

At Srinagar: A National Lok Adalat was today organized under the Chairmanship of Pr. District & Sessions Judge Srinagar, Mohammad Akram Choudhary at District Court Complex Moominabad Srinagar, in which cases as per NALSA directions were fixed.

On the occasion, Eight Benches were constituted for settlement of cases.

A total of 1,162 cases were taken up for amicable settlement out of which 909 Cases were settled. Beside this Rs 58,05,000 was awarded as compensation by MACT Srinagar and Rs 56,100 was collected as settlement amount by different courts. Fine of Rs 42,800 was also collected.

On the occasion, two Benches were constituted at Ganderbal and Kangan who took up the identified matters for amicable settlement.

A total number of 99 cases were taken up before the said National Lok Adalat Benches, out of which 11 Cases were settled through amicable settlement and an amount of Rs. 4,200 was realized as fine.

On the occasion, 02 Benches were constituted who took up the cases for amicable settlement.

A total of 48 Cases were taken up in the said Lok Adalat out of which 17 cases have been settled by Mediation and reconciliation. An amount of Rs. 10,100 has been recovered as fine and same has been deposited in Government Treasury

Four benches were constituted, two at Head Quarter & one each at D.H.Pora and Qazigund.

In National Lok Adalat 127 cases were taken up, out of which 84 cases were amicably settled and an amount of Rs. 32900 was realized as fine in different cases.

At Kupwara: The National Lok Adalat was held today at district Kupwara by the District Legal Services Authority Kupwara.

A total of 167 cases were taken up before seven benches constituted by Pr. District and Sessions Judge/Chairman District Legal Services Authority Kupwara Tasleem Arif, across district Kupwara in the court complexes of Kupwara, Handwara, Sogam and Tangdhar.

101 numbers of cases pending in various courts were disposed off by amicable settlements which even led to settlement of Rs. 2, 53,639 as compensation and fine. 24 numbers of Pre-Litigation cases were settled including bank recovery and public utility services in the National Lok Adalat.

Members of Bar, revenue officers and bank managers, and people at large participated in the national Lok adalat through Virtual means and physically on need basis after observing all SOPs of the Covid-19.

Functioning of Social Welfare, ICDS, other sectors reviewed at Kulgam