By India Education Diary Bureau Admin On May 15, 2021
Share

A team of evolutionary biologists from the University of Toronto has shown that Anolis lizards, or anoles, are able to breathe underwater with the aid of a bubble clinging to their snouts.

Anoles are a diverse group of lizards found throughout the tropical Americas. Some anoles are stream specialists. The semi-aquatic species frequently dive underwater to avoid predators, where they can remain submerged for as long as 18 minutes.

“We found that semi-aquatic anoles exhale air into a bubble that clings to their skin,” says Chris Boccia, an alumnus of the Faculty of Arts & Science’s department of ecology and evolutionary biology. 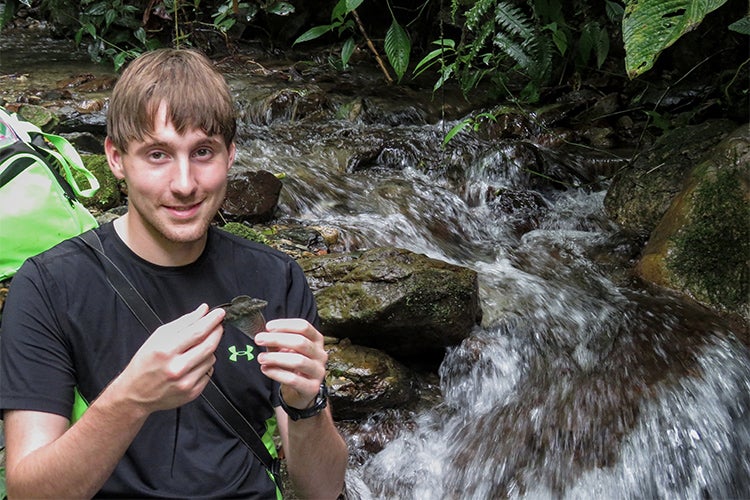 “The lizards then re-inhale the air, a maneuver we’ve termed ‘rebreathing’ after the scuba-diving technology.”

Boccia is lead author of a paper describing the finding published in the journal Current Biology.

The researchers measured the oxygen content of the air in the bubbles and found that it decreased over time, confirming that rebreathed air is involved in respiration. Rebreathing likely evolved because the ability to stay submerged longer increases the lizard’s chances of eluding predators, the authors say.

The authors studied six species of semi-aquatic anoles and found that all possessed the rebreathing trait, despite most species being distantly related. While rebreathing has been studied extensively in aquatic arthropods like water beetles, it was not expected in lizards because of physiological differences between arthropods and vertebrates.

“Rebreathing had never been considered as a potential natural mechanism for underwater respiration in vertebrates,” says Luke Mahler, an assistant professor in the department of ecology and evolutionary biology and Boccia’s thesis supervisor.

“But our work shows that this is possible and that anoles have deployed this strategy repeatedly in species that use aquatic habitats.” 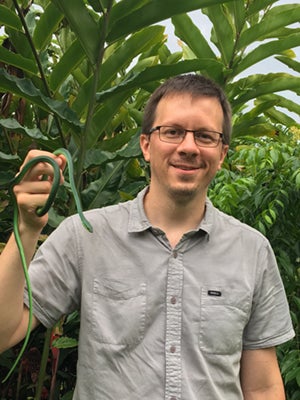 Mahler and co-author Richard Glor, from the University of Kansas, first observed anoles rebreathing in Haiti in 2009, but were unable to carry out further observations or experiments. Another co-author, Lindsey Swierk, from Binghamton University, State University of New York, described the same behaviour in a Costa Rican species in 2019. These early observations suggested that rebreathing was an adaptation for diving, but this idea had not been tested until now.

Boccia says he became interested in aquatic anoles after encountering one in Panama. He began his rebreathing investigations in Costa Rica in 2017 and continued the research in Colombia and Mexico.

As the authors note, the rebreathing trait may have developed because anoles’ skin is hydrophobic – it repels water – a characteristic that likely evolved in anoles because it protects them from rain and parasites. Underwater, air bubbles cling to hydrophobic skin and the ability to exploit these bubbles for breathing developed as a result.

While further work is required to understand how the process works in detail, Boccia, Mahler and their co-authors suggest different ways in which rebreathing may function.

In its simplest form, the air bubble on a lizard’s snout likely acts like a scuba tank, providing a submerged animal with a supply of air in addition to the air in its lungs. This is what aquatic arthropods like water beetles do to extend the time they can remain submerged.

The researchers also suggest that the rebreathing process may facilitate using air found in a lizard’s nasal passages, mouth and windpipe that would otherwise not be used by the lizard in breathing.

The bubble may also help rid waste carbon dioxide (CO2) from exhaled air through a process other researchers have already observed in aquatic arthropods. Those studies concluded that, because CO2 is highly soluble in water, and because the level of CO2 in the bubbles is higher than in the surrounding water, exhaled CO2 dissolves into the surrounding water rather than being rebreathed.

Finally, the authors speculate that the bubble may act as a gill and absorb oxygen from the water – again, something already observed in arthropods. Boccia and Mahler are planning further research to confirm if these rebreathing processes are occurring with anoles.

“This work enriches our understanding of the creative and unexpected ways that organisms meet the challenges posed by their environments,” says Mahler. “That is valuable in its own right, but discoveries like this can also be valuable to humans as we seek solutions to our own challenging problems.”

“It’s too early to tell if lizard rebreathing will lead to any particular human innovations,” says Boccia. “But biomimicry of rebreathing may be an interesting proposition for several fields – including scuba-diving rebreathing technology, which motivated our naming of this phenomenon.”

The research was supported by the Natural Sciences and Engineering Research Council of Canada, among others.

A champion of fairness and equity, Bruce Kidd to become U of T’s next ombudsperson