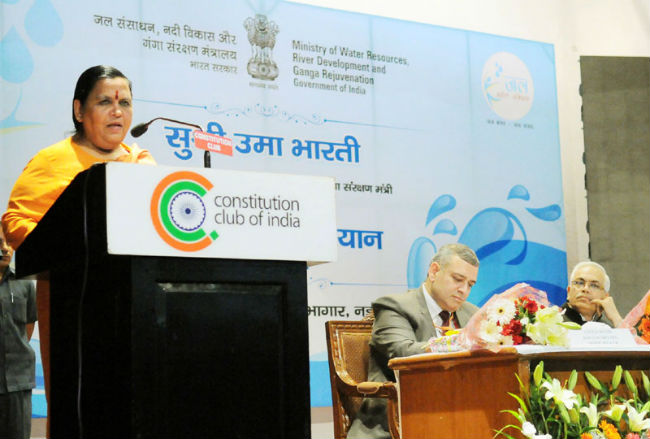 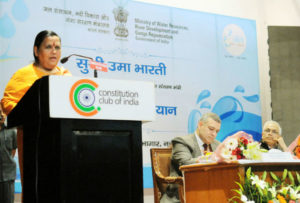 New Delhi: Union Minister of Water Resources, River Development and Ganga Rejuvenation Sushri Uma Bharti has underlined the need to make people aware about the negative impact of Arsenic in Ganga basin area. Addressing a workshop on Arsenic problem in ground water and its remediation in Ganga Basin organized by Central Ground Water Board (CGWB) in New Delhi today the Minister said that her Ministry will prepare an exhaustive work plan to meet the challenges posed by presence of arsenic in ground water on the basis of the outcome of this workshop. Sushri Bharti said there is an urgent need to start a nationwide movement to make people aware about the arsenic problem. She said everyone right from an individual to government including social organizations and NGOs have to join hand to make this movement a success.

The Minister said tapping alternate safe aquifers, for supply of arsenic free groundwater has been explored in many areas on a local scale; however, this approach would require extensive studies and analysis for mapping of groundwater availability, freshwater reserves and to examine mobilization of arsenic in the aquifer, both on spatial and temporal scale, due to forcing perturbation. She said “Under the National Aquifer mapping programme (NAQUIM) of CGWB special attention has been given to this aspect and water wells have been constructed tapping arsenic free aquifers using state of the art technology in parts of Ballia and Ghazipur districts of Uttar Pradesh”. Sushri Bharti said the present state of affairs of the growing arsenic occurrences demands a systematic translation of success stories of one place/region to another and formulating a comprehensive plan to mitigate the arsenic problem through a wider consultation process.

Union Minister of State for Water Resources, River Development and Ganga Rejuvenation Dr Sanjeev Kumar Baliyan in his address said high value of arsenic in groundwater is geogenic in nature, but as a large population is dependent on groundwater resources for drinking purposes in Ganga basin and is under the risk of health hazards, it becomes emergent to go for mitigation measures as well as alternate sources of water so that locals can be protected from negative impact of arsenic in groundwater. He said awareness of public on water quality especially about poisonous arsenic contamination need to be done and making available alternate source of water with efforts of central and state governments as well as organizations and NGOs working in the field of groundwater.
The day long workshop was attended by about 300 experts including eminent scientists from all over the country. 23 selected papers have been included in the workshop volume out of which seven were presented in the workshop apart from a panel discussion among the eminent subject experts.

University of Warwick: More than one in five top earning…

University of Amsterdam: In uncertain situations, our…

Arsenic in ground water is a geogenic contaminant i.e. caused by natural geologic processes. Arsenic-containing groundwater in Ganga River basin is hosted by the sediments deposited by the rivers during the late Quaternary or Holocene age (<12 thousand years). Incidence of high arsenic in groundwater reported from various parts of the country, particularly in the Ganga- plains is a serious threat to the health of human being. Over the last three decades numerous measures have been initiated which includes alternate arrangement for supply of arsenic free water to the affected populace and providing arsenic removal plants. Arsenic occurrences in ground water in these areas is highly sporadic in nature and all the sources in these areas are not necessarily contaminated.

Out of the above options, arsenic removal technologies and ex-situ treatment technique are being practiced widely to provide potable water to the people in the arsenic affected areas after treatment of contaminated groundwater. Their large scale use in West Bengal, based on different operating principles, with various degrees of success and failure, has been reported.

University of Warwick: More than one in five top earning bankers has benefited from…

University of Amsterdam: Communication & Media Studies number one worldwide in…

University of Warwick: More than one in five top earning bankers has benefited…