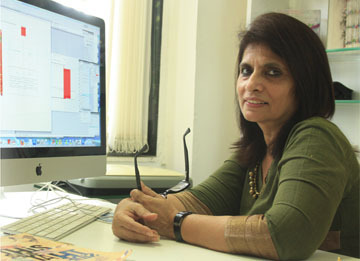 Mumbai: “HUM CHITRA BANATE HAI”, directed by Prof Nina Sabnani, produced by IDC, IIT Bombay and animated by Piyush Verma and Shyam Sunder Chaterjee won the Rajat Kamal Award for the Best Animation Film at the 64th National Film Awards this year. This film is a playfully warm story that brings to life India’s traditional art by incorporating it innovatively in the animation itself. The 64th National Film Award ceremony is scheduled for May 3, 2017 from 6:00pm onwards.
The fascination of vibrant art created with painstaking hours of handiwork by artist communities in India – pushed forward by strong culture and traditions – is what draws Nina Sabnani. Her films are the equivalent of a research paper for Nina, much more accessible and a lot more colourful. Her first film was based on a series of four Madhubani paintings she bought at an exhibition in 1981. The fact that the art was themed on an anti-dowry sentiment struck her. Her second film titled Mukand and Riaz was an ode to her father.
Her award-winning film retells a myth of the Bhil people of Jhabua district in Madhya Pradesh using the visual idiom of the Bhils. Nina has taken the Participant Observation method of ethnography to the next level. Animation allows for a clear tangible outcome (a film) to be produced in collaboration between the researcher and the subject. She looks at animation as a way of empowering communities.
As Professor of Visual Ethnography at IDC, IIT Bombay, Nina continues nurturing her own research process and that of her students. Some of the topics she is involved in through her PhD students include the notion of domesticity in Hindi cinema, using images as prompts instead of words in the classroom to elicit essay writing and the non-formal art training that children of Bhil artists get in their lifetime. IDC at IIT Bombay has a strong programme in Animation Design where Prof Nina Sabnani is a faculty member. IIT Bombay has also been growing in disciplines such as Design apart from its established strengths in the science and technology domain. Winning this National Award is a proud moment and a sign of its strengths and its spirit of pursuing excellence in all spheres.