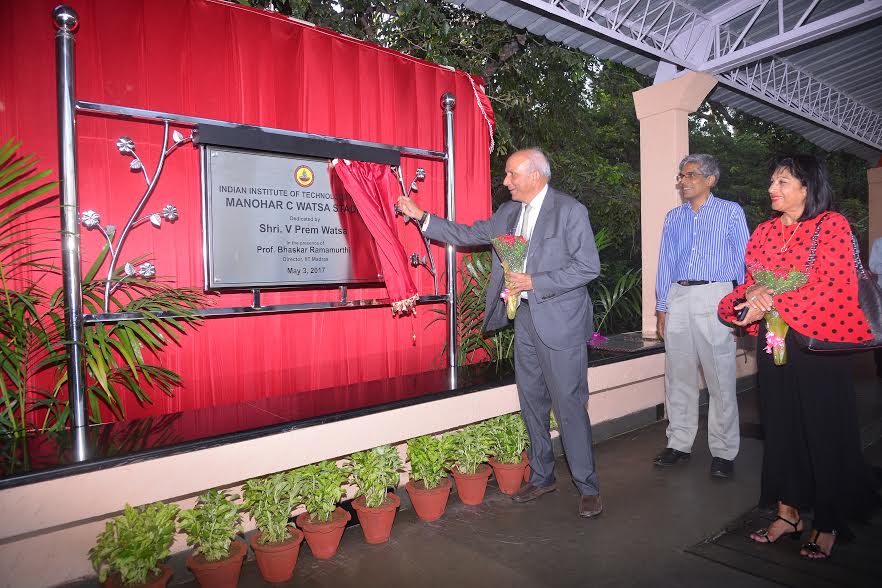 Chennai, May 03, 2017: Shri Prem Watsa, Chairman of Fairfax Financial Holdings, inaugurated the Manohar C Watsa Stadium at the Indian Institute of Technology Madras during a function held here on Wednesday, May 03, 2017. A 1971-batch Chemical Engineering graduate of IIT Madras, Shri Prem Watsa is one of only 150 alumni to be designated as a “Distinguished Alumnus” by the Institute.

Shri Prem Watsa’s generous contribution has enabled the Institute to renovate the Institute’s stadium and construct a state-of-the-art 400-meter 8-lane synthetic track in the stadium, in memory of his father Manohar C Watsa.

The track area is about 5,300 sq.m. with provisions for long jump, triple jump and a pole vault platform. Two warm-up practice steps of size 20 x 2.4 x 1.8 m have also been constructed adjacent to the track. Facilities for other sports such as shot-put, football, and cricket have also been provided inside the inner bowl of the track.

In addition, the stadium spectators’ gallery has been renovated with new flooring and an entrance gate with access for the differently abled. A walker pathway, with a width of 3m, has also been constructed along the periphery of the synthetic track. The track has been awarded with “Class II Athletic Facility Certification” by the International Association of Athletic Federations (IAAF).

The inauguration comes in time for the 52nd Annual Inter-IIT Sports Meet, scheduled to be held on the IIT Madras campus during December 2017. It is worth noting that for nine consecutive years, from 1972 to 1980, IIT Madras has won the General Championship, more often than any other IIT.

Speaking on the occasion, Shri Prem Watsa, Chairman of Fairfax Financial Holdings, recalled that during his time at IIT-Madras, the sports team unexpectedly won the Inter-IIT Sports Meet. And when he returned to IIT-Madras campus about nine years later, he had learned that IIT-Madras had not lost even once in that nine-year period. He told the students to win the Inter-IIT again this year and “make Prof. Bhaskar more proud that he already is.” He also added the five years he spent at IIT-Madras were the best years of his life.

Prof. Bhaskar Ramamurthi, Director of the Indian Institute of Technology Madras, pointed out that Shri Prem Watsa was the Sports Secretary in 1971.

Speaking on the occasion, Prof. Bhaskar Ramamurthi, Director of the Indian Institute of Technology Madras, said “Our students have benefitted greatly from Mr. Prem Watsa’s generosity, and this stadium with its world-class facilities is one more example of his munificence. We are grateful to him. We are proud of his accomplishments and our students consider him a role model.”

Commenting on IIT Madras’ success over the years, and the role the renovated Stadium will play in future years, Prof. Santhosh, Faculty Advisor-Sports, IIT Madras, mentioned that “This synthetic track will provide a unique experience for the athletes of our institute as well as the those from other IITs, and we expect a few records to be broken during this year’s Inter IIT Sports meet at IIT Madras”.

Prof. Ligy Philip, Chairperson of the Engineering Unit, IIT Madras, expressed pride in how the Stadium had turned out, observing that “the track and associated facilities were developed on par with international standards in the midst of forest cover. The development was made in such a way as to not hinder the movement of wildlife on campus.”

Prof. R Nagarajan, Dean of International and Alumni Relations, IIT Madras, welcomed the benevolent gesture by Shri Prem Watsa as another instance of an alumnus reconnecting with a personal touch. “Prem was a sportsman in his time as a student, and this reflects his desire to give back in a way that resonated with him. He was the Sports Secretary of Jamuna Hostel, and also later the Institute Sports Secretary. He used to play hockey for the institute, and also quite a lot of table tennis. In fact, IIT Madras started winning the Inter-IIT trophy during his tenure as the Institute Sports Secretary. So, this is something very special to him and to the Institute.”