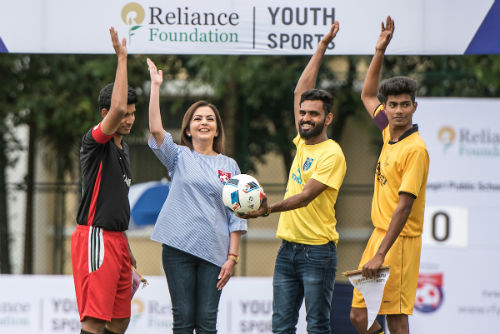 Mumbai: The second edition of the path-breaking Reliance Foundation Youth Sports’ national football competition kicked off here on Wednesday, with its chairperson Mrs Nita Ambani committing herself to transform India into a multi-sports nation in the not too distant future.

Mrs Ambani, a proud Member of the International Olympic Committee, seeks to build a sports eco-system in the country that will not only encourage kids and youngsters to take up sport but will also provide every child a platform to nurture his or her talent.

Cheered on by thousands of school kids at the Rajagiri Public School here in Kochi, Mrs Ambani kicked the ball towards India striker and Kerala Blasters star CK Vineeth to throw open the tournament that will be played in 30 cities across the country.

“Reliance Foundation Youth Sports has been conceived to reignite sports in schools and colleges,” Mrs Ambani said, just before the inaugural match between Rajagiri Public School and Assisi Vidya Niketan.

“We have a holistic plan for all major Olympic sports and we will reach our goal by inspiring our children to love and play sports,” she added.

The RFYS football tournament is set to become the biggest grassroots effort in the country, with over 3,000 educational institutes and more than 60,000 children preparing to compete over the next five months.

The tournament which was held in the eight ISL cities in the inaugural year will be held in Bengaluru, Ahmedabad, Shillong, Aizwal, Imphal and Jamshedpur as well this year. In Kerala and Goa, which area already reaping benefits from the first year and are known for their footballing talent, it will extend to schools and colleges in their entire state.

One of the poignant moments at the launch was the induction of Ajith Sivan, a 20-year-old student from Nirmala College in Kochi, into the Kerala Blasters team for the upcoming ISL.

“Ajith showcased his skills in the RFYS tournament last year. He proved to be so good that the Blasters have already picked him up,” Mrs Ambani proudly declared. “We are confident that we will help discover many more Ajith Sivan’s in the country,” she added.

The RFYS national football competition will be played in four categories: Junior Boys, Senior Boys, Senior Girls and College Boys. It will begin with the pre-qualifying rounds in each city and will be followed by the main draw to pick the worthy winner; the winning teams will then compete with each other to coronate the national champion.

Reliance Foundation Youth Sports will produce video footage from the matches, starting from the main draw to the finals. This will help the scouts assess the raw talent across the country. Additionally, the archived video footage is expected to assist in technical analyses, as also in identifying shortcomings so that they can be curbed at a young age itself.