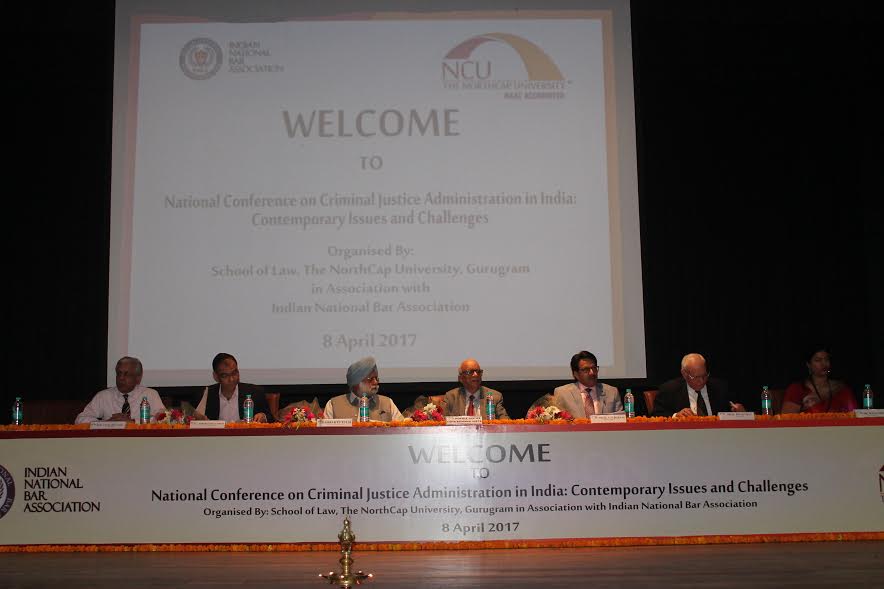 The Conference had various technical sessions where the students and professionals from many institutions presented their research papers. Three research papers were awarded the First, Second and Third Prize in the Conference. Arshia Katyal, USLLS (GGSIPU) and Smrita Sinha, Amity Law School, Delhi won the first position. The second prize was given to Anusha Arif and Akash Chaudhury, Aligarh Muslim University, U.P. The third prize was awarded to Jyotsna Arora and Karandeep Singh, USLLS (GGSIPU).

In his Welcome address, Prof. (Dr.) Prem Vrat, Pro-Chancellor, NCU expressed his pleasure to host the conference on a contemporary theme and stated “a holistic approach is the need of the hour towards facilitation of better criminal justice administration”.One of his suggestions was interlinking of law and technology to facilitate a smoother justice administration.

Emphasizing on the importance of the Conference on an area which is highly crucial in today’s time, Mr. KTS Tulsi expressed concerns about the invisibility of the victims and the plight of the poor section in the criminal justice system. He also provided concrete suggestions such as recording of telephonic calls in police stations and setting up a separate interrogation room.

Justice Vidya Bhushan Gupta shared some of his experiences and challenges encountered during the justice delivery process. He referred to some of the crucial provisions of the Criminal law and encouraged the young lawyers to explore the possibility of their effective application in the administration of criminal justice. Justice Gupta also highlighted the plight of the victims in the process.

Delivering the keynote address, Prof. (Dr.) G.S. Bajpai, Registrar, National Law University Delhi, emphasized on crucial issues such as access to justice, how the poor class is placed in the system and over-criminalization. He also expressed- “lesser importance has been given on criminal justice, which itself has become a problem rather than a solution”.

Addressing the participants from all over the country, who have contributed their research papers on various relevant themes such as cyber-crime investigation, juvenile justice, courts etc, Prof. Bajpai suggested all the researchers from other institutions as well as the NorthCap University to focus on conducting empirical studies to identify the major challenges in the criminal justice system.

India Education Diary Bureau Admin Jul 24, 2021
MIT has granted tenure to five faculty members in the MIT School of Science in the departments of Brain and…