Home State News Delhi NUS, NTU and SP Jain claim top honours in the tenth edition...
Share on Facebook
Tweet on Twitter
Singapore: Defending champions Rohan Naidu and Shivam Bhardwaj of National University of Singapore (NUS) overcame a stiff competition from Arvind Ramesh and Anshuman Anand of Nanyang Technological University (NTU) to win the coveted champion title and trophy at Tata Crucible Campus Quiz Singapore 2017 held on Thursday, February 9, 2017 at Shaw Foundation Alumni House, National University of Singapore. The third place was bagged by Tanushree Kumar and Sahaj Chopra of SP Jain School of Global Management. This year, for the first time, NUS Business School were the host partners.
The quiz received a participation of 164 students in 82 teams from prominent local institutions, including Nanyang Technological University, National University of Singapore, SP Jain School of Global Management and Singapore Management University. The preliminary round consisted of 20 questions across various topics addressed to all participants. This was followed by a short wild card round amongst teams ranked 7 to 14 based on the scores, out of which 2 teams joined the 6 top scoring teams to make an eight-team stage final.
The final 8 teams on stage, all of whom were tested with five rounds of live, rapid-fire quizzing, included:
Rohan Naidu and Shivam Bhardwaj from National University of Singapore
Arvind Ramesh and Anshuman Anand from Nanyang Technological University
Tanushree Kumar and Sahaj Chopra from SP Jain School of Global Management
Anuvrat Mohta and Gaurav Kothari from Singapore Management University
Balaji Sreevatsan and Abhay George Nainan from Nanyang Technological University
Vinodhanan and Chan Medric from National University of Singapore
Ryan Quek and Dylan Chong from National University of Singapore Business School
Chen Tianming and Chu Yu See from National University of Singapore
Overjoyed with the victory, Rohan Naidu from NUS said, “It is absolutely nerve wracking and fun to be part of the Tata Crucible Campus Quiz. The intensity and presence of mind to answer the questions within seconds kept us on the edge. I cannot contain our joy on winning this competition once again, and am extremely thankful to my quiz partner Shivam at the University”. Shivam Bhardwaj (his partner) added, “I enjoyed being part of the competition. Giri’s style of quizzing is impeccable and he kept us motivated throughout the quiz.”
Guest of honour for the evening, Dr Janil Puthucheary, Minister of State, Ministry of Communications and Information & Ministry of Education, presented the prizes to the winning teams. He said, “The quiz competition in this type of an environment and this atmosphere, gives the students and the participants the chance to do something very different, to apply their knowledge, apply their reading, in a competitive environment, have fun with the knowledge and see how they can think laterally and think critically and push themselves against peers.”
The Tata Crucible Campus Quiz Singapore 2017 was hosted by ace quizmaster Giri Balasubramaniam. The evening was graced by senior Tata leaders from Singapore and representatives from the local universities amongst others. Channel News Asia is the official Broadcast Partner for the quiz and will be telecasting the quiz in a half-hour capsule.
The first telecast is on February 19, 2017 at 9:30pm (GMT+8) and the repeat telecasts are on February 20, 2017 at 12:30am (GMT+8), February 20, 2017 at 1:30pm (GMT+8) and February 21, 2017 at 2:30pm (GMT+8). 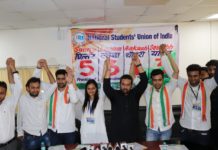 Delhi govt. schools get thumbs up from parents in NCR, finds survey