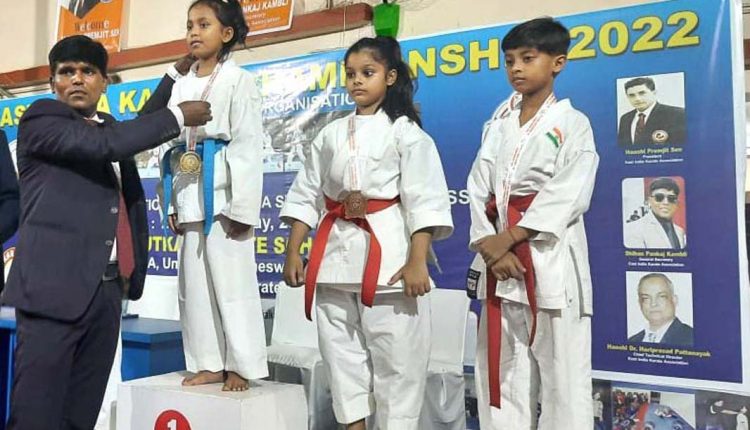 Globus Infocom was awarded for the excellent work to promote…

Oorja Samanta participated in 8 years Sub-Junior female category Individual Kata event and for Individual Kumite event she took part in 23+ Kg weight category. Oorja won Gold Medal in both the events. Earlier she qualified for the zonal event as the state champion from Odisha. More than 300 competitors took part in this East Zone Karate championship in different categories from West Bengal, Odisha, Bihar, Jharkhand, Chattishgarh, Sikkim and Andaman & Nicobar Island. The winners and the runners up of different events are qualified to participate in the national level competition to be held in Delhi next month.

Mr. Somnath Samanta, father of Oorja, commented on her achievement, “This is a very happy moment for us. We introduced our daughter to Karate at a very young age of three years to make her confident and self-reliant. Later we realized that she had an innate talent in marshal art, and she enjoyed it very much. We put our best effort to take her to the best of the coaches for further development. We have shifted her to Baleswar, so that she gets the exposure of a world class infrastructure for learning Karate. Seeing her performance Odisha government has taken the whole responsibility of Oorja to nurture her talent.”

“Oorja gets huge support from her school Griffins International School, Kharagpur. The recognition and encouragement from her school play a vital role in her holistic development. The ethos of the school says academics and sports both are equally important. I would urge every parent to encourage and support their children to pursue their hobby in a more serious way. So that they can find the right path to flourish in life” – Mr. Samanta added.

Visibly delighted Mr. Abishek Kumar Yadav, Academic Director and Chairman, Griffins International School, said, “We are extremely happy about the feat of our little champion Oorja Samanta. She has been consistently displaying remarkable performance in Karate and receiving great accolades from the coaches, referees, and judges of national repute. She would now take part in the national level competition to be held in Delhi next month. We always believe in a holistic development of a child and committed to provide a conducive environment at the school campus to promote gifted children. Oorja is exceptionally talented, and I am sure that she would go a long way and make us proud”.

iednewsdesk May 27, 2022
Two Griffith University researchers dedicated to creating a more sustainable world have been recognised for their…

University of Western Australia: A tale of carbon’s travels…