New Delhi: The University of Oxford in United Kingdom will host the 2017 YGLP Global Conference to be held in the month of November. The YGLP Global Conference at Oxford will be attended by YGLP Fellows from YGLP Asia, YGLP Europe, YGLP Americas, YGLP Africa and YGLP Oceania.
The YGLP Global Conference will be attended by a host of luminaries from different fields including several Nobel prize winners and renowned scientists.
A total 800 schools and 500 colleges and universities from 44 Asian countries have qualified for YGLP ASIA 2017-18 including a combined total of 120 institutes from India. Institutes are selected for YGLP Asia by a panel on multiple criteria including pedagogic and physical infrastructure for leadership development, strategy for leadership development and international outlook.
Seven Indian cities – New Delhi, Mumbai, Bangalore, Hyderabad, Chennai, Kolkata and Ahmedabad are also among 54 cities picked up from Asia to host the maiden edition of YGLP ASIA in the continent. This cities will host YGLP Global Leadership Workshops and YGLP Leadership Conferences during the year 2017-18 bringing some of world’s greatest icons to this cities.
YGLP is an international leadership program for young people aged 13 to 25 years. Developed by Human Science Lab, London, the program aims to nurture young people into future global leaders.
YGLP is offered as Junior Fellow Program (age 13- 19) and Senior Fellow Program (age 19-25). Candidates successfully completing the program are assigned as YGLP Fellow. The YGLP Fellow program is delivered through a set of two-day Global Leadership workshops and instructional & resource materials in the form of printed books, e-books & CDs.
YGLP is based on the Four-Step Leadership Principle and Four-Step Leadership Theory developed under the transcontinental Leadership Project at Human Science Lab. The principle states that the leadership achievement of an individual is proportional to the optimal use of four principal components that makes a leader – motivation, planning, energising and executing.
YGLP is made of four modules, each module focusing on one of the four leadership component as identified in the Four-Step Leadership Principle.
The four core modules of YGLP are supplemented by a non-core module “Curiosity & Questioning”. This module is meant to deepen the passion to explore and know, providing a framework for knowledge acquisition. 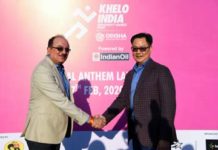 IOCL Comes on board as presenting sponsors of the inaugural season of Khelo India University Games, Odisha, 2020