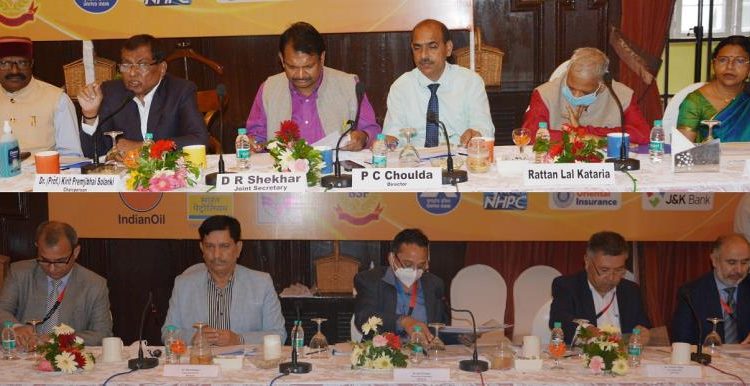 SRINAGAR : Parliamentary Standing Committee on the Welfare of Scheduled Castes and Scheduled Tribes today held several interaction and deliberation sessions with J&K Bank management and employees as well as officers and Jawans of Border Security Forces (BSF) to know about the working conditions and other issues of the committee’s subject matters.

On the outset, the study group met employees of J&K Bank who briefed about the work culture of the bank and talked about reservations, recruitment and other issues of Scheduled Castes and Scheduled Tribes and welfare measures and programmes of the Bank.

Also, the committee held deliberations and sought the feedback from the Chairman and Managing Director of J&K Bank, R K Chhibber with respect to due representation of SCs and STs in the institution, services and training for such categories, promotion and appraisals of such employees.

The committee appreciated the measures taken by J&K Bank with respect to implementation of different schemes and disbursing of loans meant for weaker sections like SC/ST.

The team also held an interaction with Jawans of Border Security Force (BSF) stationed at Kashmir valley who belong to SC and ST categories and enquired about their working condition in the force.

The BSF Jawans said that there is a proper mechanism within the forces to address issues, problems and grievances and they don’t face any kind of problems during their professional duties.

The committee also held deliberations with Director General BSF, Pankaj Kumar Singh and top officers of the force over the recruitment, filling of post of SC and ST categories, promotion of such categories and other issues.

The DG BSF informed the committee that the force follows all the rules and norms meant for recruitment and reservation of BSF Jawans and officers.

While speaking on the occasion, Chairman PSC on SC & ST appreciated the role of BSF for securing borders and providing security to people of the country.

The mandate of the committee is to examine the measures taken by the union government to secure due representation of the SCs and STs in services and posts under its control.

These include appointments in the Public Sector Undertakings, Nationalised Banks, Statutory and Semi-Government Bodies and in the Union Territories with regard to the provisions of Article 335 of the Indian Constitution.