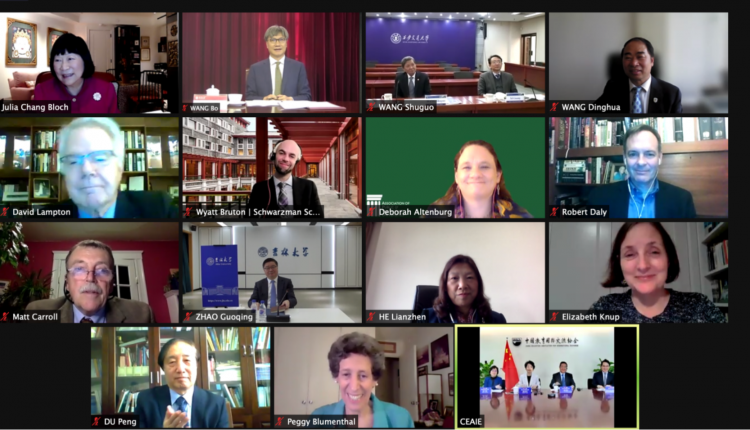 Peking University, April 6, 2021: An online symposium with the theme “Reshaping Educational Exchanges between China and the U.S.” was held on March 25, aiming to bring China-U.S. educational exchanges back on the right track through discussing prevailing challenges and formulating possible solutions. The online symposium was hosted by China Education Association for International Exchange. Wang Bo, vice president of Peking University, attended the event and delivered a keynote speech. Xia Hongwei, director of PKU Office of International Relations, was also present.

In his keynote speech about the current situation of educational exchanges between China and the U.S., Wang Bo remarked that Peking University has been actively advancing cooperation with partner universities in the U.S. in spite of the pandemic and the international situation. He urged both sides to carry out extensive dialogues and enhance mutual understanding and trust through new methods of communication. Meanwhile, Wang stressed the endeavors of partner institutions in consolidating the achievements of international cooperation and bringing together leading scholars in cutting-edge research fields from around the world to advance research and build bridges of communication between the sciences and humanities.

At the same time, educational institutions in the two countries have strengthened collaboration to facilitate two-way student exchanges. With the assistance of Julia Chang Bloch, president of America-China Education Foundation, Peking University established the Berger Memorial Fellowships aimed at promoting exchanges between Chinese and American youth. The first awarding ceremony was held during the pandemic. In light of the pandemic, Peking University and partner institutions in the U.S. have established new mechanisms for joint student training on top of pre-existing exchange programs. Peking University has accepted undergraduates from Harvard University, Cornell University and the University of Virginia to study at PKU, giving them the opportunity to experience the curricula and campuses of universities in both China and the U.S.

In his speech, Wang Shuguo, president of Xi’an Jiaotong University, said the world should be more united with less disagreements and more mutual trust. To this end, exchanges between Chinese and American youth are of vital importance. The ultimate aim of education is to cultivate future-oriented students and encourage mutual understanding, support and care among youths. He hopes that through this dialogue session, universities can better advance China-U.S. cultural exchanges and pave the way for bilateral youth exchanges.

Liu Limin, president of China Education Association for International Exchange (CIAIE), emphasized in his concluding remarks that the countless hard-won achievements of bilateral educational collaboration require collaborative maintenance. Fluctuations in political relations ought not to sway the tradition of friendly exchanges, especially educational exchanges, between peoples in the two countries. He looks forward to collaborating with the institutions represented by the American speakers to promote open dialogues between education sectors in China and the U.S. and encourage a positive development of China-U.S. relations and world peace.

Julia Chang Bloch, president of America-China Education Foundation, praised the timeliness of the symposium in her concluding remarks. She saw educational exchanges as one of the cornerstone of China-U.S. communication that can push bilateral communication at all levels back on the right track as soon as possible.