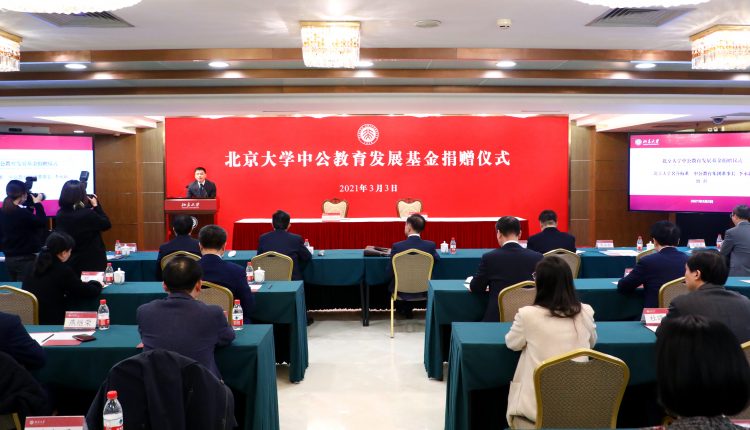 Peking: Peking University has received the single largest private donation from an alumnus since its founding. The donor is Li Yongxin, chairman of the Board of Offcn Education Technology Co., Ltd. Li, together with the Beijing Zhonggong Public Welfare Foundation founded by him, donated 1 billion yuan to set up PKU-Offcn Education Development Fund. Prior to this, Li had donated 180 million yuan to Peking University. The whopping donation aims to provide Peking University with all-rounded support in areas such as disciplinary development, teaching & research, faculty and student training.

Qiu expressed heartfelt gratitude and utmost respect to Li and Offcn Education. Li’s donation has forged closer ties and opened new doors of opportunity in Peking University during this critical period, once again rendering great support to his alma mater. Qiu said every donation from Li has been poured into helping the most urgently needed areas of the University, providing great support to PKU’s development. Li’s generous donation will also help push PKU in achieving higher quality development.

Hao extended his appreciation to Li for giving back to his alma mater. He noted that Li stays firm to the concept of “leveraging education to change the future and creating values for the world” in running his enterprise. This is also an important essence in PKU’s students training objectives. He said Peking University will work closely with Li, Offcn Education, other alumni at home and abroad, and friends from all walks of life, hoping this will bring greater contribution to the world and a brighter future.

Li reflected on his student life at Peking University and showed great gratitude to his teachers and alma mater. He said both Peking University and the alumni have given him great support and encouragement in his entrepreneurship and career development journey. As such, Offcn Education will work harder and achieve greater heights. Looking ahead, Li expressed his strong desire for the first 10 billion societal and education donation to be given to Peking University.

Sun expressed his great respect to Li, saying that he is much impressed by the development of Offcn Education and Li’s diligence, kindness, self-discipline, and warm-heartedness. He said these merits embody the aims and spirits of Peking University and Peking University CEO Club, adding that Li’s donation set a new example for PKU alumni.

Meanwhile, Qiu presented Offcn Education with the Award for Outstanding Educational Contribution to Peking University. The ceremony also witnessed the signing of the donation agreement by Hao and Li.

Li was admitted to the Department of Political Science and Public Administration in 1995, which is now known as the School of Government at Peking University. When Li was about to graduate from Peking University in 1999, he started his own business. With more than 20 years of dedicated development, Offcn Education has become a leading vocational education institution in China. Its main business covers three major areas including enrollment examination training, academic qualification preparation and vocational ability training.

This is only one of the many significant donations made by Li. In recent years, Li made donations to support the School of Government in teaching, research and student training. He also supported a series of activities in 2018 that celebrated the 120th anniversary of Peking University. In the same year, Li donated 100 million yuan to finance Peking University in building a quality campus, pressing ahead with alumni-related work and promoting the disciplinary development of humanities. Li continued with his generous donations to the School of Government and the Graduate School of Education in 2019, followed by his financial support to the “White Angel Guardian Fund” in 2020.

With a heart of giving and high hopes for the future development of Peking University, PKU alumni have been making donations to offer support. In particular, the “White Angel Guardian Fund”, which was set up by PKU alumni amid the COVID-19 pandemic, raised over 100 million yuan within three days to support PKU’s medical workers in the fight against the coronavirus outbreak.

Over the years, donations and contributions have continued to grow. In addition to monetary donations, some have also diversified to real estate and equity donations. With immense financial support from alumni, Peking University has established more scholarships, international exchange funds, research and innovation funds, which advances the development of natural science and humanities disciplines, as well as the improvement of the infrastructures on campus. The donations made by alumni have become a pillar of support for Peking University in a wide range of aspects, giving impetus to PKU’s endeavor of building a first-class university in the world.