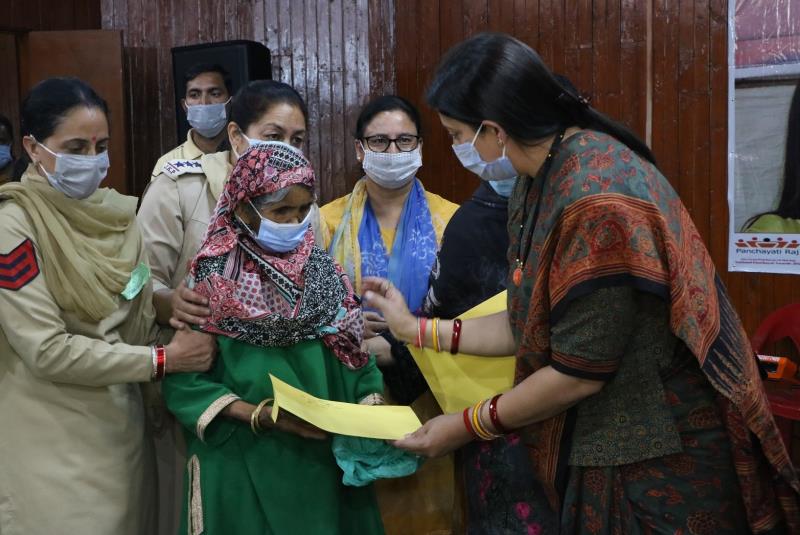 BUDGAM: “Everybody I met today has a message of faith in PM Modi and we are keen on delivering upon the promises made by the Union Government to the people of Jammu and Kashmir.” These remarks were made by Union Minister for Women and Child welfare Smt. Smriti Irani on her two day visit to Budgam as a part of Union Government’s outreach initiative.

The Minister presided over a day long function organized by Directorate of ICDS and Department of Social Welfare in connection with celebration of 4th Rashtriya Poshan Maah 2021. The minister said that 31000 smart phones have been provided to 28000 Aganwadi Centers operational in the UT of J&K and about 9 Crore rupees have been provided as monetary relief to the deserving women and children across the UT of J&K under Poshan Abhiyan Scheme.

The Minister expressed gratitude and hailed the efforts of district administration for the measure taken to mitigate the effect of COVID 19 pandemic. She said that district administration has demonstrated commitment and dedication while rendering their services despite challenging circumstances. “I salute all COVID warriors, health workers police, civil administration officials and other volunteers who despite all dangers put themselves into high risk and saved many precious lives,” she said.

Secretary Social Welfare, Sheetal Nanda in her welcome address said that aim and objective of celebrating this Poshan Maah is to spread the message and awareness among the concerned about precautions and preventions during pre and post natal periods.

Earlier the Minister laid the foundation stone for up-gradation and widening of 10 Km road from Budgam to Mamat to Handjan coming at a cost of Rs 5.85 crore to be executed by NABARD .

Later the Minister chaired the meeting of officials of district administration to review up-gradation and reformations besides completion of various developmental initiatives through different centrally and state sponsored schemes in the district. The Minister appreciated the efforts of District Administration in ensuring the timely completion of key projects mostly linked to common people’s interest despite facing huge hardships and disruptions due to COVID 19 crisis.

During the meeting the minister emphasized upon the need for collective sharing of responsibility from all line departments in facing challenges and ensuring vibrant implementation of all schemes. She stressed for establishment of mobile desk in police stations where female clients going through domestic violence or other physical abuses shall register their grievances.

The Minister also interacted with different delegations of DDC’s, BDC’s, PRI’s and MC’s about their demands and grievances. The Minster gave them a patient hearing and directed district administration to register all genuine issues for proper redressal.

Later delegations from traders, youth clubs, and local deputations also had an interaction with the Minister and put forth their issues and demands. The minister assured them of addressing the genuine demands and also taking up the issues with concerned central Govt. Ministries.

The Minister also visited Sheikh ul Alam Hall Budgam and distributed nutrition kits, sanction letters among the selected beneficiaries including adolescent children and old age persons. Later the minister participated in a plantation drive at the nearby Bihisti Zehra Park.