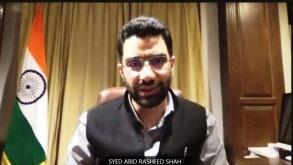 SRINAGAR : The World Bank Mission, Washington D.C has applauded the Government of J&K and JTFRP for its efforts in the implementation of the USD 250 Million, Jhelum Tawi Flood Recovery Project (JTFRP).

The World Bank team hailed the efforts of the last two years made in the project implementation of JTFRP, which has shown remarkable progress across the various project parameters.

These comments were made during the 5-Day Virtual Mission of World Bank, Washington D.C. The task team leader of the World Bank Mission, Hemang Karelia and other members took a detailed and comprehensive review of the entire project during the 5-day virtual mission.

The team had discussions with PMU (Project Management Unit), JKERA and the PIUs (Project implementation units) SMC, PWD (R&B), I&CD, J&KERA, and JKMSCL that are implementing the (06) components of the project.

Chief Executive Officer, JKERA/JTFRP, Dr. Syed Abid Rasheed Shah, during the kick off meeting said that Jhelum Tawi Flood Recovery Project which is being executed as part of Prime Ministers Development Package (PMDP) during the last 2 years has shown a remarkable progress with more than 90 percent of procurement undertaken during the said period .

He said that 82 sub-projects out of the total of 213 stands completed under the project as on date.

Dr. Syed Abid said that progress under the CERC (Contingency Emergency Response component) that had been activated under the project in view of the medical emergency necessitated due to the COVID-19 pandemic has shown a remarkable progress with 44 sub-projects out of the total of 69 sub-projects involving the procurement of several critical care equipments for various hospitals across the J&K having been already procured and installed in the hospitals.

He further said that work on 30 Oxygen Generation Plants being constructed under the project in the (30) hospitals situated in remotest parts of U.T is going on war footing basis and will be completed within the stipulated time frame.

Work on the (04) mega storm water drainage projects in Srinagar city and various road upgradation sub-projects which were taken up for execution by J&KERA post COVID-19 lock down in 2021 have also shown remarkable progress, he added.

The Department of Economic Affairs (DEA) Ministry of Finance, Govt of India during the past (03) TPRM ( Tripartite Portfolio Review Missions) held during last two years has also expressed satisfaction over the implementation of JTFRP since last two years and post-merger of JTFRP in JKERA.

During the 5 day virtual mission the World Bank team had a detailed discussion on the progress achieved on each (6) components of the project which include Reconstruction and Strengthening of the Critical Infrastructure, Reconstruction of the Roads and Bridges, Restoration of the Urban Flood Management System, Restoration and Strengthening of the Livelihoods, Strengthening of the Disaster Risk Management System, and Contingency Emergency Response for Covid -19 with the each PIU (Project Implementing Unit) wherein progress undertaken under each component was discussed and World Bank team gave its valuable inputs for the smooth and timely execution of the project.

Over a period of last 2 years many significant sub-projects like Composite Market Centre for Silk at Rajbagh, Composite Market Centre for Wool at Bemina, 20 BaLa (Building as a Learning Aid ) designed by Govt. primary school buildings for promotion of innovative and creative teaching methods for children studying in Govt schools, studies like the one on Designing of new building codes, creation of DSS (Decision support System) for scientific management of natural disasters have also been completed which will have significant positive impact on the livelihoods of lacs of families and scientific management of the natural calamities.