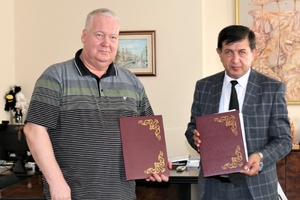 During the meeting, the rector of PetrSU A.V. Voronin and the rector of BGMI Sh.Zh. Teshaev signed an agreement on the creation of joint international programs in the specialties “General Medicine” and “Pharmacy”.

The agreements were signed in order to establish and expand mutually beneficial exchange and academic mobility, as well as to promote medical progress and cooperation between Russia and Uzbekistan.

Assam down town University achieves a record of 90 percent…

The creation of joint medical specialty programs is an important step that we took today with the rector of PetrSU Anatoly Voronin. In the very near future, we will begin discussing the possibility of joint clinical residency programs. The educational and practical base of PetrSU, as we know, is very strong, so we want to cooperate with your university.

I am sure that our cooperation will give real results and after studying on joint programs with PetrSU, highly qualified specialists will return to Uzbekistan,

Let us remind you that in February of this year in Bukhara, a meeting of Vice-Rector for Academic Affairs K.G. Tarasova with the rector of Bukhara State Medical University Sh.Zh. Teshaev, during which the issues of educational and scientific cooperation between our universities were discussed for the first time, and a Memorandum of Understanding and Cooperation was signed. More details

PetrSU students are the pride of the university