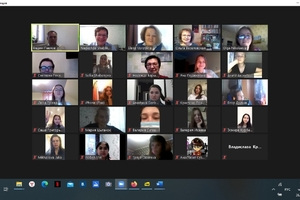 The Institute of Foreign Languages ​​of PetrSU hosted a scientific-practical conference with international participation “Intercultural space: linguistic and didactic aspects”, dedicated to two significant dates: the 80th anniversary of PetrSU and the 55th anniversary of foreign language education in the Republic of Karelia.
During the event, which consisted of more than 150 participants from Russia, Germany and the USA, specialists in the field of linguistics, teaching foreign languages ​​and preparing for intercultural communication discussed current trends in the modern foreign and domestic educational space related to these aspects. Given the difficult epidemiological situation, it was decided to hold the conference on the ZOOM video conferencing platform.

At the plenary session, the Vice-Rector for Scientific Work of PetrSU V.S. Syunev, who emphasized the importance of knowing a foreign language in the modern world. Associate professors of the Department of German and French languages ​​E.I. Tsypkin and N.I. Tokko, teachers with solid professional experience, told the audience about significant events in the history and life of a foreign language, the director of the Institute for Foreign Languages ​​I.V. Kreneva introduced the conference participants to the prospects and challenges in modern reality.

The invited guests of the plenary session from the Higher School of Economics (Moscow) touched upon topical problems in linguistics and didactics. Thus, associate professor O.I. Vinogradova presented the organization of work on the use of language corpora in the study of a foreign language. Associate Professor M.A. Lytaeva spoke about the international online project that the HSE is conducting together with the Ruhr University (Bochum, Germany) in order to form the intercultural competence of students and showed ample opportunities for online internationalization.

In the section “Intercultural linguistics”, reports were heard, which dealt with the most different linguistic aspects of English, German and French. It is gratifying that the online distance format of the conference allowed to unite in this section representatives of not only PetrSU, but Moscow Pedagogical University, Peoples’ Friendship University of Russia, Higher School of Economics, Mordovia State University, Ural State Economic University.

All presentations, despite the variety of aspects of research and the languages ​​they touched upon, aroused keen interest and questions. It was not without a discussion of the topic of coronavirus – from a linguistic position: the wave of neologisms, which swept across all languages ​​like a wave of a pandemic, will interest linguists in all countries for a long time.

During the work of the section ” Intercultural translatology”speakers represented not only different philological departments of PetrSU, but also other Russian universities from cities such as St. Petersburg, Tula and Ivanovo. In particular, Natalya Kirillovna Ivanova, Doctor of Philology, Professor of the Ivanovo University of Chemical Technology, drew attention to some difficulties in translating the lexemes “science”, “scientific” and a number of their synonyms into English. Vladimir Nikolaevich Andreev, Ph.D., Associate Professor, Head of the Department of English Philology, Tula State Pedagogical Institute named after L.N. Tolstoy. Conducting a comparative analysis of the draft and published versions of the translation of Teffi’s story “And Time Was Not” into English, made by the American translator Anne Marie Jackson,

Reports of Associate Professor of the Department of Germanic Philology and Scandinavian Studies, Ph.D. T.S. Davydova, senior teacher of the department of German and French languages ​​O.A. Veselovskaya and senior teacher of the same department V.P. Petrova (correspondence participation) had as their object the translation of regional realities. They aroused a genuine interest of the student audience, most of which were students of the Linguistics: Translation and Translation Studies field of study , whose curriculum contains a similar discipline. I would like to note that the maximum number of participants in the section reached 66 people just at the speeches of these speakers.

The issues of translation of literary texts from German into Russian were the subject of reports by Ph.D., Associate Professor of the Department of German and French languages ​​E.N. Vorotilina and senior teacher of the Department of Foreign Languages ​​of Humanities O.O. Nikolaeva, who introduced the audience to the works of the writers Adolf Mushg and Bernhard Schlink.

Reports of associate professors of the Department of English N.P. Shablikova and V.O. Pavlova considered particular issues of the theory of translation based on the need to develop acting skills in the training of interpreters and the peculiarities of grammatical transformations in the translation of media texts.

The general positive impression about the work of the section “Intercultural translatology” was expressed by the students of the Institute of Foreign Languages, Robiya Amanova and Esmira Kurbanova, noting how much their horizons in the theory and practice of translation had expanded as a result of reading all the reports.

The meeting of the section “Intercultural didactics” (moderated by E.V. Borzova, Ph.D., professor, acting head of the Department of English at PetrSU) was also interesting. The speakers represented different departments of two institutes of PetrSU (IIL and IF) and two other universities of the Russian Federation (Peter the Great St. Petersburg Polytechnic University and Pitirim Sorokin Syktyvkar State University). The participants had the opportunity to ask all the questions of interest and discuss the content of the speeches, which revealed various aspects of the methodology of teaching foreign languages.

On the second day of the conference, the scientific and practical forum “Professional development of a young specialist in the context of teaching a foreign language and foreign language culture” took place at the ZOOM platform .The organizer of the forum was Irina Viktorovna Lebedeva, chairman of the council of young teachers at the trade union of education of the Republic of Karelia, deputy director of the secondary school No. 3, graduate of the Institute of Foreign Languages ​​of PetrSU. The forum was attended by over 60 teachers from educational organizations of our republic, teachers and students of the Institute of Foreign Languages ​​of PetrSU, teachers of the Petrozavodsk motor transport technical school, employees of the Petrozavodsk presidential cadet school. The speakers of the forum, laureates and prize-winners of the All-Russian competition “Teacher of the Year of Russia” and the republican competition “Teacher of the Year of Karelia” of recent years have shared effective educational technologies and methodological techniques that they use in their work. Elena Vasilievna Borzova ,Doctor of Pedagogy, Professor of the English Language Department of the Institute of Foreign Languages ​​at PetrSU, she examined in detail the trends of modern foreign language education. The forum became a bright educational event for teachers of a foreign language of our republic and received a positive response from the participants.

Within the framework of the conference, there was also a student scientific forum, on the site of which students of universities had the opportunity to present the results of their linguistic and didactic research, as well as improve the skills of academic communication.

Based on the conference materials, a collection of articles will be prepared, the placement of which is planned in the database of the Russian Science Citation Index (RSCI).

Participation in the scientific conference of the Vologda State University