Andaman & Nicobar Islands, Assam, Bihar, Jharkhand, Mizoram, Odisha, Tripura, and West Bengal participated in the Eastern competition. The winners of Regionals will compete at the Nationals scheduled in December 2021, and the best will enter WorldSkills Competition to be held in Shanghai, China in October 2022. 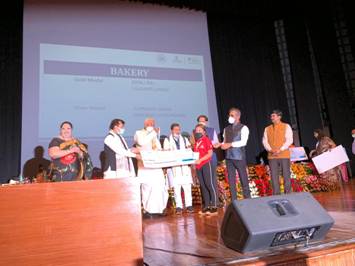 Shri Phagu Chauhan expressed his happiness  by seeing the enthusiasm and high spirit of the participants. He was a delighted to witness the skills showcased by the participants in the past three days. He said that IndiaSkills is not only a competition but a platform, which enables showing Indias capabilities to the world. He added that he is looking forward to the skills performance of the winners at the National Competition and WorldSkills as well. He congratulated all the participants and wish the winners luck for the National Competition.

Applauding the winners achievements, Shri Jibesh Kumar said that this Regional Competition will help select the best performers for national and international levels. He further said that the Regional Competition provides a platform to the youth for skilling, learning and gaining experience. With the strength and power of skilled youth in the country, we can become the ‘Skill Capital of the World’, he added. The more we skill the youth, motivate them to adopt new skills, the more we will be able to expand India’s skill ecosystem.

Shri Nitin Navin said that In the IndiaSkills Competition, skilled youth from different states and union territories compete in their respective trades. He appreciated the efforts of the Ministry of Skill Development and Entrepreneurship and National Skill Development Corporation. These efforts are crucial in consistently identifying the potential and polishing the young talents of our country, he added. He assured that the Bihar government will continue to promote the youth.

Witnessing over 250,000 registrations, IndiaSkills 2021 began with district and state-level competitions in August-September. This year, IndiaSkills Regionals will bring together 1,500 participants from 30 states/union territories across 5 regions. Candidates get multi-level industry training through boot camps and programs such as project-based training, industry and corporate training, exposure visits to industries, mind coaching, and personality development. NSDC, through Sector Skill Councils (SSCs) and partner institutions, trains the candidates not only for the competition but for future endeavors, making them job ready.

WorldSkills, the gold standard for skill excellence, is a biennial event that records participation from over 80 nations. Skilled and talented youth from across the world compete on the international platform in multiple trades. In the previous edition of WorldSkills held in Kazan, Russia in 2019, India ranked 13 of 63 countries that participated in the global event. More than 1,350 candidates participated in 56 skills, and team India gave its best-ever performance by winning four medals (one gold, one silver, two bronze medals) along with 15 Medallions of Excellence.

Below is the state wise medal tally.

The Prime Minister Praised the “Phad” made by IGNCA