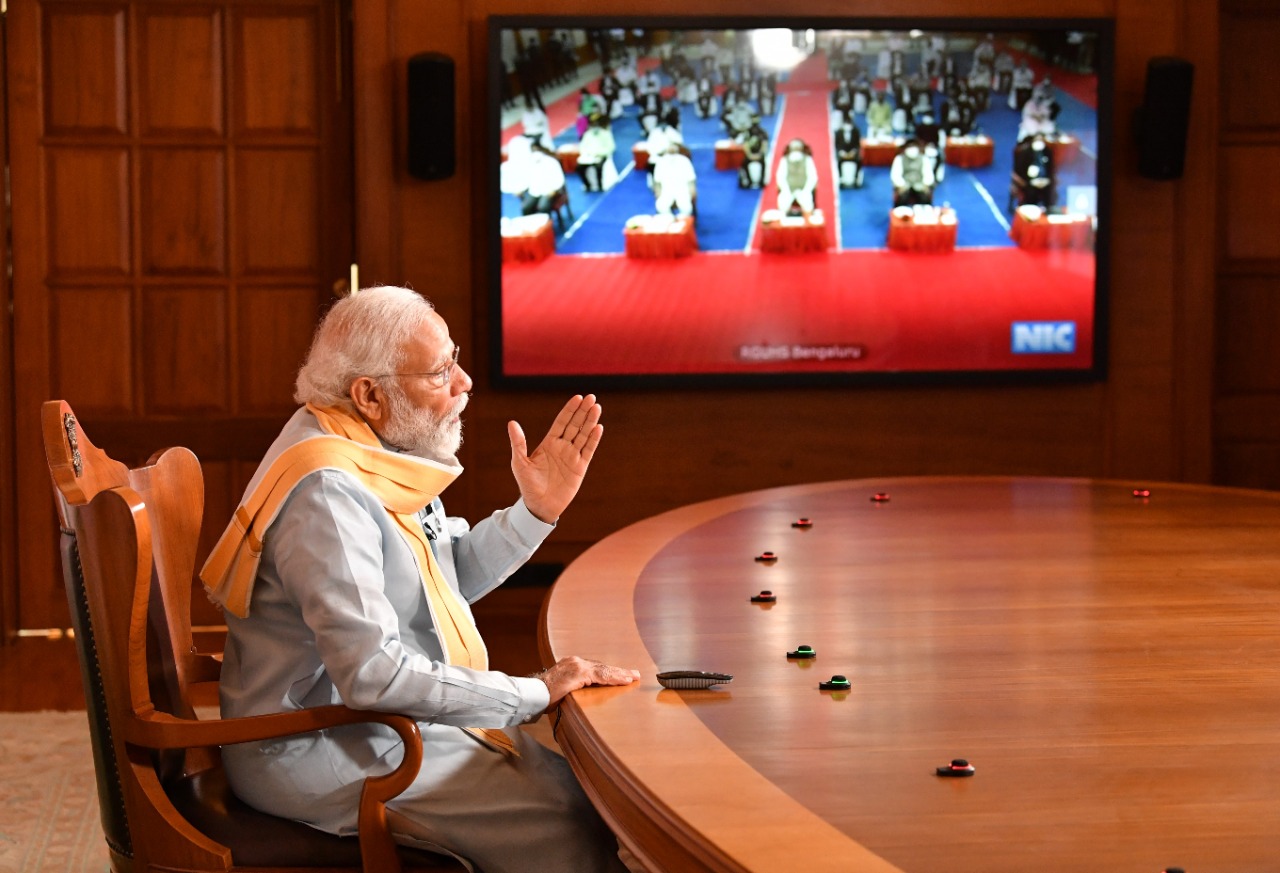 New Delhi: The Prime Minister delivered the inaugural address at the 125th Annual Session of Confederation of Indian Industries (CII) through video conference today. The theme of this years annual conference is “Building India for a New World : Lives, livelihood, growth”

Speaking on the occasion, Prime Minister Shri Narendra Modi said such online events are becoming the new normal due to Corona. This is also the biggest strength of human beings that makes a way out of every difficulty, he added. He said, “On the one hand, we have to take strict steps to fight this Virus and save the lives of the countrymen and on the other hand we have to stabilize the economy and speed it up.”

Referring to the theme of this year’s annual session, the Prime Minister praised the indian industry for starting the discussion of “Getting Growth Back”. He urged the industry to go beyond it and said “Yes! We will definitely get our growth back.” He said that his trust in India’s Capabilities and Crisis Management, in India’s Talent and Technology, in its Innovation and Intellect of India, in the Farmers of India, MSME’s, Entrepreneurs makes him confident about getting the growth back.

PM said Corona may have slowed down the speed of the growth, but today the biggest fact is that India has overtaken the lockdown phase and entered in the Un-Lock Phase one. A large part of Economy has opened in Un-Lock Phase one. A lot is going to open after 8th June. Getting Growth Back has started, he added.

The Prime Minister emphasized that when Coronavirus was spreading in the world, India took the right steps at the right time. He said “Today we get to know how widespread the effect of lockdown in India is, by comparing it with other countries.” He said “Re-strengthening Economy against Corona is one of our highest priorities.” For this, the government is taking the decisions that are required immediately and also those that are required in the long run, he added.

The Prime Minister listed the steps taken by the Government in helping people during this crisis situation. Pradhan Mantri Garib Kalyan Yojana has helped a lot in providing immediate benefits to the poor. Ration has been delivered to about 74 crore Beneficiaries under this scheme. Free ration is also being provided to migrant workers. Be it women, disabled persons, elderly, laborers, everyone has benefited from it. During the lockdown, the government has delivered more than 8 crore gas cylinders to the poor – that too free. 50 lakh private employees have got the Government contribution of 24% of EPF amount in their bank accounts, which amounts to Rs.800 Crore.

Prime Minister listed 5 things which are very important to build a Aatmanirbhar Bharat and to bring India back on the path of rapid development, viz. Intent, Inclusion, Investment, Infrastructure and Innovation. These are reflected in the bold decisions taken by the Government recently, he added. He also said that many sectors have been made ready for the future.

The PM said “For us reforms are not any random or scattered decisions. For us reforms are systemic, planned, integrated, inter-connected and futuristic processes. For us, reforms means having the courage to take decisions, and taking them to a logical conclusion.” He listed out the initiatives of the Government to make an encouraging ecosystem for the private enterprises like Insolvency and Bankruptcy Code (IBC), Bank merger, GST and Faceless IT assessment.

The Prime Minister further said that the government is also doing such policy reforms which the country had given up hope. In the agriculture sector, the Prime Minister said the rules and regulations made after independence, left the farmers in the hands of middlemen. After amendment in Agricultural Produce Market Committee (APMC) Act, now farmers have the right to sell to anyone, in any state of the country.

The PM said that labour reforms are being done to increase employment opportunities, keeping the welfare of our workers in mind. Non-strategic sectors in which the private sectors were not allowed, have also been opened. Commercial mining is now allowed in the coal sector, he added. Prime Minister said “In the direction the government is moving, be it our mining sector, energy sector, or research and technology, industry will also get opportunities in every field, and new opportunities will also open for youths. Going beyond all this, now the participation of private players in the strategic sectors of the country is also becoming a reality. Whether you want to invest in the space sector, or want to explore new opportunities in atomic energy, the possibilities are completely open for you.”

The Prime Minister said the Micro, Small and Medium Enterprises (MSME) sector is like an economic engine of our country and contributes around 30% of the GDP. He said that a long time demand of the industry to update the definition of MSMEs has been fulfilled. This will enable MSMEs to grow without any worries and they will not have to follow other paths to maintain the status of MSMEs. Global tenders have been scrapped in government procurement of up to Rs 200 crores to benefit crores of associates working in MSMEs of the country, he added.

PM said that the expectation of India from the world has increased and they trust India more. India helped more than 150 countries with medical supplies, he added. The Prime Minister said that the world is looking for a trusted, reliable partner. In India, there is a potential, strength and ability. He urged the industry to take full advantage of the trust that has developed towards India.

The Prime Minister stressed the need to invest for the creation of a Robust Local Supply Chain that strengthens India’s stake in the Global Supply Chain. He gave a call for big institutions like CII to come forward in a new role post-Corona to make India self reliant. He stressed for the need to have products made in the country, made for the world. He urged the industry to set targets to increase productivity in all sectors. He praised the industry for having created Personal Protective Equipments – PPEs industry worth hundreds of crores within 3 months.

The Prime Minister urged the industry to take full advantage of opening up investment and partnership with farmers in the rural economy. Now necessary infrastructure is being prepared for clusters of local agro products near the village. He said that the government considers the private sector as a partner for the country’s development journey. He promised that every need of the industry related to the Aatmanirbhar Bharat Abhiyan will be taken care of. He asked the industry to pledge to make the country self-sufficient and put their full strength to fulfill this resolve.

ANN clings to a winning streak, acquires leadership on all news-heavy days