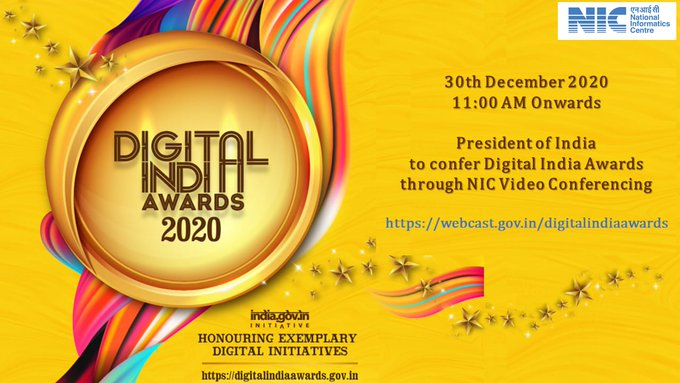 New Delhi: President of India Shri Ram NathKovind will virtually confer the Digital India Awards 2020 on 30th December 2020 at 11:00 AM via video conferencing. In line with Digital India’s vision, this is the first time that the entire process of the Digital India Awards is being conducted online from nominations to screening to the final awards ceremony. National Informatics Centre (NIC) under Ministry of Electronics & Information Technology (MeitY) has been conducting the biennial Digital India Awards (DIA) to promote innovation in eGovernance and digital transformation of government service delivery mechanism.

The event will commence on 30 December 2020 at 11:00 AM. The event will be telecast live on Doordarshan and will also live streamed on NIC Social media platforms:

The 6th Digital India Awards 2020 have been announced under the following six categories:

Innovation in Pandemic: To felicitate a Government Entity which has developed an outstanding, innovative digital solution to facilitate the citizens to undertake various activities with ease during the time of pandemic in areas like communication, health, education, travel etc. or to ensure continuity of government services.

Excellence in Digital Governance – MINISTRY / DEPARTMENT (Central): To felicitate a Ministry or Department of the Government of India which has a comprehensive digital presence and displays a high level inter and intra-Department Integration in its digital initiatives. Integration with electronic authentication and digital payments are also assessed.

Excellence in Digital Governance – STATE / UT: The Award acknowledges the State/UT of India that displays exemplary initiative in establishing comprehensive digital presence in sectors like health, labour, finance, social justice and environment leading to the accomplishment of sustainable development goals.

Excellence in Digital Governance – DISTRICT: To reward the accomplishments of the District administration which has displayed exemplary focus on providing comprehensive information to the citizens in the regional language. Entries must display the spectrum of coverage highlighting the important facets of the district in terms of tourism, art, culture, handicraft and access to utilities.

Exemplary Product: The award honors those products that have made their mark in the field of Digital Governance. The product must have shown a high degree of replicability, scalability and must be successfully implemented by government departments / entities. Aspect of Digital security is a primary criterion of evaluation.
In addition to above six categories, Jury Choice Award will be conferred to honour excellence in design and implementation of National Public Digital Platform.

In order to initiate and steer the activities for the Digital India Awards 2020, a high level Jury under the Chairmanship of Secretary, MeitY with representation from government, industry and academia was constituted.