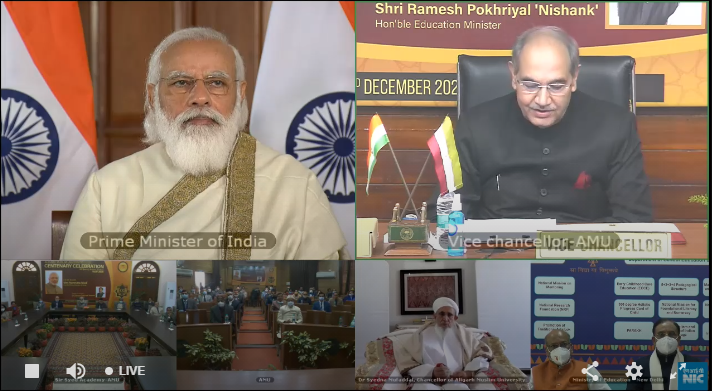 Aligarh: “Aligarh Muslim University (AMU) represents a ‘mini India’. Its campus is like a city in itself. We see a Mini India among different departments, dozens of hostels, thousands of teachers and professors. The diversity which we see here is not only the strength of this university but also of the entire nation,” said the Prime Minister of India, Shri Narendra Modi Ji.

He was delivering the keynote address as the Chief Guest of Centenary celebrations at the University via videoconferencing. AMU, set up in 1920, has completed 100 years of existence as a centre of higher learning. The Prime Minister also released a special commemorative postal stamp in the event which was also joined by the Union Education Minister, Shri Ramesh Pokhriyal Nishank as the Guest of Honour.

Prime Minister, Shri Modi Ji hailed the contribution of AMU in nation-building and in elevating India’s position internationally through the extensive researches conducted in the university.

He pointed out that at AMU, if students receive education in Urdu, so can they in Hindi and if on one side students study Arabic at the University, they also study and research in Sanskrit.

“It is engrossing to see religious scriptures of Hindus, Muslims and other faiths shelved together at the Maulana Azad Library of the university. This is what India is all about, and AMU functions every day on this principle,” said Prime Minister Modi.

He elaborated: “Sir Syed Ahmed Khan said that when you receive education and come into the work sphere, you must work towards all, without any discrimination, without seeing caste or creed or religion. That is a thought that we must always carry with us.”

The Prime Minister further said: We must not forget this power of diversity, nor let it get weakened. We should work together to ensure that spirit of ‘Ek Bharat, Shrestha Bharat’ grows stronger day by day in the campus of Aligarh Muslim University.

He also pointed out that AMU has crafted and polished millions of lives, giving people modern and scientific thinking and inspiring them to do something for the society and the Nation.

Acknowledging the role of the university in country’s fight against Covid-19, the Prime Minister said: “During this tough time, the way AMU helped out society is phenomenal. Getting people tested, creating isolation wards and contributing a big amount to PM-CARES, show how people related to AMU are committed to the Nation.”

He stated: The school dropout rate among Muslim girls was more than 70 percent and this situation persisted in India for 70 years. In these circumstances, the government started Swachh Bharat Mission, built toilets in villages and toilets for school-going girls. Now this rate has fallen to nearly 30 percent.

“At AMU, the research done in Urdu, Arabic and Persian language is commendable. Especially the research conducted in Islamic history elevates the position of India in the Islamic world and gives new energy to India’s relation with them,” he said.

PM Narendra Modi emphasised, “AMU alumni represent the rich heritage and the culture of India wherever they go.”

“It is fascinating to see how the history of education attached to AMU buildings is India’s valuable heritage. I often meet AMU alumni during my foreign visits, who very proudly say that they have studied at AMU,” said the Prime Minister.

He further pointed out that the country is marching forward on the path where every citizen would get the benefits of development happening in the country without any discrimination.

The country is on the path where every citizen should rest assured about their constitutional rights and their future, said the Prime Minister.

I assure you that no citizen irrespective of religion, caste and creed would be left behind on the path of Sabka Sath, Sabka Vikas, Sabka Vishwas, said the Prime Minister adding that everyone will get equal opportunities to fulfil their dreams.

The Prime Minister invited suggestions from students of AMU to achieve the goal of ‘Vocal for Local’, New India, Aatmanirbhar Bharat.

He also said that alumni of AMU had actively contributed to the freedom struggle of India.

The Guest of Honour, Union Education Minister, Shri Ramesh Pokhriyal ‘Nishank’ said that AMU has come a long way since its establishment as a university in 1920.

“AMU has emerged as one of the premier most Indian institutes of the Nation producing Bharat Ratnas like the Frontier Gandhi, Khan Abdul Ghaffar Khan and Dr Zakir Husain. The success story includes seminal contributions of its students and faculty members to various areas of knowledge,” said the Education Minister adding that scientist alumni from AMU have brought laurels to the nation.

He pointed out that AMU had Begum Sultan Jahan as its first Chancellor in 1920 and this was a unique example of women empowerment at a time, when women had very little space in public services.

Shri Ramesh Pokhriyal said that India has a strong leadership and the implementation of National Education Policy (NEP) 2020 will transform the Country.

“NEP 2020 will bring integration of academic, professional and vocational education; while revamping curriculum, pedagogy, assessment and student support for enhanced student experiences,” he said adding that the policy attempts to bring into focus the notion of knowledge of many arts or liberal arts from the country’s historical education system to 21st Century education system.

For the successful implementation and execution of NEP 2020, we have a huge expectation from our higher educational institutions like AMU and we are looking forward to their constant support, said the Education Minister.

Shri Ramesh Pokhriyal emphasised that India is becoming a Vishwa Guru (World Leader) and it is the responsibility of our educational institutions to lead in the realm of education and ideas and to deepen the understanding of our intellectual heritage. The light of education coming out of AMU will lead the path for Naya Bharat (New India).

Welcoming the Prime Minister, AMU Vice Chancellor, Professor Tariq Mansoor said, “Today is a historical day as our University not only completes 100 glorious years from its inception, but it is after a gap of 56 years, an incumbent Prime Minister of the country is taking part in the University celebrations. ”

He added: “Today, as per official figures, the Muslims are at the lowest rung of the education and socio-economic ladder. They need the support of the Government of India and various other agencies for the upliftment. AMU offers unstinted support in achieving this goal in accordance with Section 5 (2) c of the AMU Act. AMU is also at the forefront in the struggle to achieve Womens’ Empowerment through Education. ”

The Vice Chancellor said that Shri Narendra Modi is a visionary leader who has dedicated his entire life to the service of our country and has provided India and all Indians a bold and lofty vision.

“The presence of the Prime Minister has ignited possibility and hope among all of us. For centuries despite diversities, we are living as a people in oneness and this is what makes Bharat unique and this is a message to the whole world,” he emphasised.

“Prime Minister’s life story is an inspiration to every Indian as it is full of exemplary work ethics, dedication, rising by overcoming hardship and obstacles. He played a pivotal role in elevating India’s image globally and with his vision and farsightedness, India has taken a firm stand against expansionist policies in our neighbourhood, and this has been appreciated much, the world over,” pointed out Prof Mansoor.

He furher said: “Under the astute leadership of Shri Modi, India has been able to strengthen its traditional and historical ties with the West Asian countries as well as other world powers. The welfare of the economically poor is always the foremost priority of the Prime Minister and we have witnessed this in various schemes launched during his tenure.”

Prof Mansoor also pointed out that by committing to ‘Sabka Sath SabkaVikas’, the Prime Minister has voiced his concern for the economic and social upliftment of India’s poorest.

“I take this opportunity to congratulate the Hon’ble Prime Minister and Education Minister for the New Education Policy, which will transform the education system in India. The Education Minister has provided able leadership in the field of education in the time of Covid-19 Pandemic,” said Prof Mansoor.

He added, On this historic event, thousands of alumni, like me, feel an overwhelming sense of pride and love for our founder Sir Syed Ahmad Khan, who was a patriot of the soil. The guiding principle of Sir Syed’s life is described in one of his famous quotes ‘The first requisite for the progress of a nation, is the brotherhood and unity among all sections of the society’.

Sir Syed was a champion of Hindu Muslim Unity, he practically demonstrated how to achieve communal harmony and brotherhood among people of all faiths, the Vice Chancellor said.

“Besides being a great seat of learning in traditional fields, AMU today is also at the forefront in imparting modern and scientific education,” he emphasised.

The Vice Chancellor said that AMU which is an institution of National importance needs continued support to maintain its historic, special and constitutional character for the good of the nation.

“AMU has contributed immensely in the country’s struggle for independence, and nation building, throughout its history. This institution has changed the lives and destinies of innumerable families, majority of who, belong to the economically weaker sections of the society,” said Prof Mansoor.

AMU Chancellor, His Holiness, Syedna Mufaddal Saifuddin said that AMU has not only established itself as the premier Indian centre of learning, but it has also raised the bar of Indian education system in the international community.

He added that the Islamic faith lays stress on gaining knowledge and implementing and extending to others. It is the duty of the Muslims to benefit the society and the Nation with their knowledge.

He praised Prime Minister, Shri Modi for his exemplary work and prayed for his long life and good health.

Prof Naima Khatoon (Principal, Women’s College) said that the fact that the first AMU Chancellor was a woman is a testimony of the vision of women empowerment at AMU since its establishment.

She spoke on how the Women’s College, Women’s Polytechnic and a dedicated Advanced Centre for Women Studies at AMU are immensely contributing to empower women.

Regional stage of the All-Russian Olympiad for schoolchildren