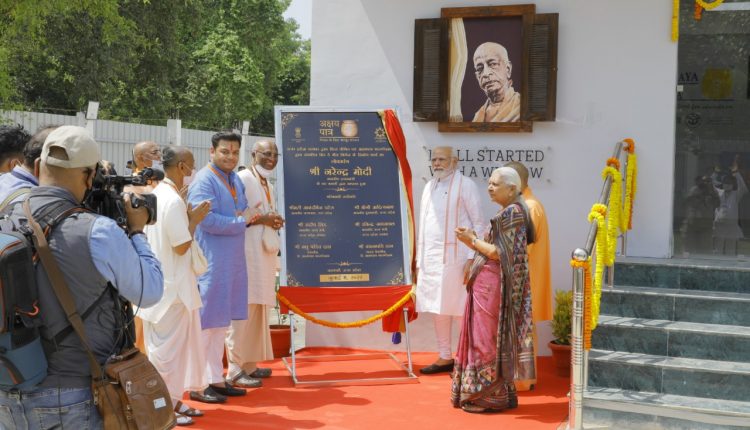 The state-of-the-art centralised kitchen supported by Westbridge Capital is spread over an area of 3 acres. It is Akshaya Patra’s 62nd kitchen in the country and fifth in the state of Uttar Pradesh. It will enable the Foundation to impact the lives of over 100,000 children through the Pradhan Mantri Poshan Shakti Nirman (PM POSHAN) [formerly the Mid-Day Meal (MDM) Scheme].

The inauguration event was followed by a tour of the kitchen facility and a symbolic serving of meals to the children. The dignitaries present unequivocally commended Akshaya Patra’s efforts to address hunger and malnutrition in the country through the feeding programme and pledged their support to the organisation’s endeavours.

Speaking at another event after the Akshaya Patra kitchen launch, Prime Minister Narendra Modi said: “I had the opportunity to inaugurate the centralized kitchen for the mid-day meal scheme (PM Poshan) today. During the ceremony, I had the privilege of interacting with a few 10 and 12-year-old children from a government school from my city Varanasi. I must say, the next time I come to Varanasi, I should meet the teachers of these students. I was with them for merely 15 minutes, but the kind of talent these kids had, the confidence and the variety in skills they demonstrated… and to think they study in a government school, and come from ordinary families is worth noting.”

Expressing his gratitude, Shri Madhu Pandit Dasa, Chairman, The Akshaya Patra Foundation, said, “I extend my heartfelt gratitude to the Hon’ble Prime Minister, Shri. Narendra Modi ji for taking time off from his busy schedule to inaugurate our new kitchen in Varanasi. I want to thank the Hon’ble Governor, Smt. Anandiben Patel ji, and Hon’ble Chief Minister, Shri. Yogi Adityanath ji for gracing this auspicious occasion. Today, we write yet another chapter in our association with the Government of Uttar Pradesh. We are immensely grateful to the Government for this opportunity to serve the children of Varanasi and would like to take this moment to reiterate our commitment to various developmental programmes and initiatives of the administration. I also want to thank Mr Sandeep Singhal, Co-Founder & MD, of Westbridge Capitol & their team for sponsoring this kitchen and supporting our efforts to address classroom hunger.”

He further added, “Such collaborative efforts by all the stakeholders will surely take us closer to our mission to ensure a world where children do not have to choose between education and food. Lastly, I would also like to take a moment to thank the Ministry of Education (MoE), Government of India, for their continued support to our efforts to serve children and communities over the last 21 years.”

Akshaya Patra has been an implementing partner of the Government of Uttar Pradesh for the school lunch programme since 2004. With the launch of the new kitchen, the Foundation will be implementing the programme in Varanasi.

The new unit will follow world-class manufacturing practices and the highest standards of hygiene, food safety and quality to ensure that nutritious mid-day meals are cooked and delivered to children in the region. Its salient features include a roti machine with 40k rotis/hr capacity, a 700-ltr capacity rice cauldron with a hydraulic system, 1,200-ltr capacity dal cauldron with automatic motors and an RO plant for water purification.

Further to its efforts to integrate sustainability into its policy, Akshaya Patra will use solar panels for electricity production with a heat pump and solar water heater to boil water which is to be used in production.

In adherence to the MDM Guidelines and as per the practice of serving food in accordance with the local palate, Akshaya Patra’s menu for Varanasi will include mixed veg soya masala, chole masala, rajma masala, roti, jeera rice, plain rice, veg pulao, masala bhaji pulao, kheer and a fruit.