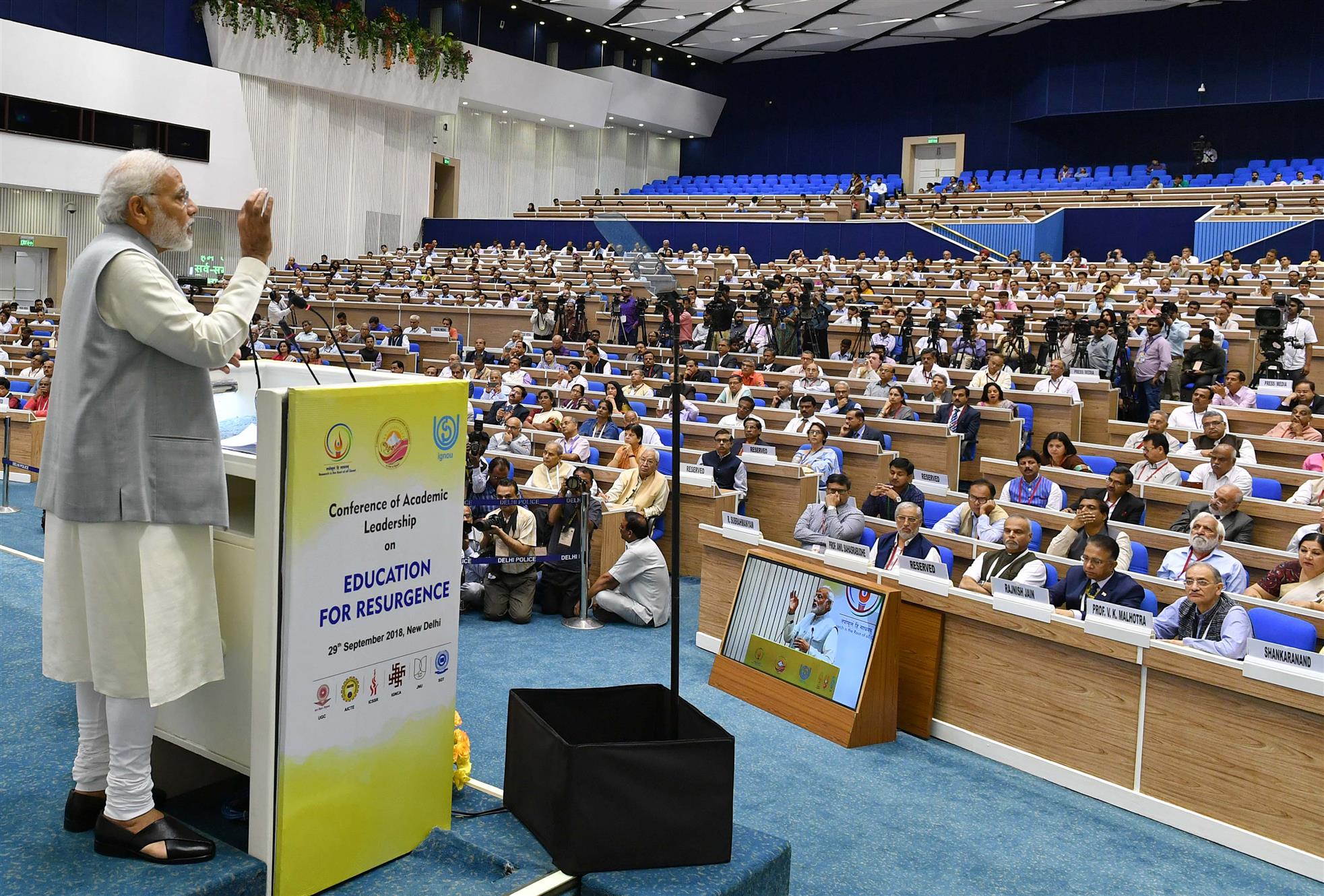 Speaking on the occasion the Prime Minister, Shri Narendra Modi said that when one thinks of resurgence or revival, the first image that comes to mind is of Swami Vivekananda, who presented before the world, the strength of Indian thought.

Recalling the ancient Indian texts, the Vedas, the Prime Minister said that we cannot imagine our society, our country, and even our lives, without knowledge. He said that our ancient universities such as Taxila, Nalanda and Vikramshila, gave importance to innovation, besides knowledge. The Prime Minister also recalled the views on education of Babasaheb Bhimrao Ambedkar, Deendayal Upadhyay, and Dr. Ram Manohar Lohia.

Shri Narendra Modi said that today, no country or person can live in isolation. He mentioned the importance of thinking in terms of ‘global citizen’ or ‘global village.’ He said our Universities and Colleges should be leveraged to find solutions to the challenges facing us. We should “Interlink Institutions to Innovate and Incubate”, he added. He urged students to link their classroom learnings to the aspirations of the country. He also mentioned Atal Tinkering Labs which have been set up to encourage children to innovate. He mentioned the RISE – Revitalization of Infrastructure and Systems in Education -programme for improving education infrastructure. He mentioned the steps taken for higher education.

The Prime Minister emphasized the importance of preparing good teachers for society. He also said that scholars and students can take responsibility for spreading digital literacy, and generating greater awareness of government programmes that can improve ease of living.

The Prime Minister said that the youth has given “Brand India” a global identity. He mentioned schemes such as Start Up India, Stand Up India and Skill India, which are aimed at nurturing young talent.

The theme of the Conference is to deliberate on the challenges facing the Indian education system and to work out a plan for a paradigm shift both in terms of achieving academic outcomes and also in regulation of education.

While addressing the gathering, Shri Prakash Javadekar lauded the vision and mission of Prime Minister Shri Narendra Modi in providing holistic development in education sector with a stress on research and innovation. Shri Javadekar said that without innovation a nation cannot achieve sustainable growth, so the Ministry of Human Resource Development has taken a number of initiatives like IMPRINT, Smart India Hackathon (SIH), GIAN, SWAYAM and National Digital Library (NDL) to change the structure of the entire education system in this direction. The minister said that high technology research labs are being developed to promote brain gain as innovation in higher education is a key focus to support research within the country. He also informed that the budget allocation of Rs 1,00,000 crore for Revitalising Infrastructure and Systems in Education (RISE) will also help to step up investment in research and related infrastructure. Government is promoting quality education in identified aspirational districts through RUSA, he added.

Shri Javadekar said that to ensure quality education, the ministry has developed learning outcomes, which will fix accountability on education providers. He also informed that for the overall development of students government has started ‘ Samagra Siksha’ in which government is providing financial assistance to all government schools for library and sports and extended hostel facility for Katurba Gandhi Balika Vidyalaya. The Union Minister congratulated all organizers for organizing the conference.

The Conference inaugurated by the Prime Minister, will have several sessions covering eight thematic areas namely:

Improving pedagogy for learner centric education – use of artificial intelligence for customized learning
From job seeking to job creating – improving innovation and entrepreneurship
Improving quality of research – focus on requirements of India
Bringing synergy among educational institutions – pooling of academic resources like sharing of libraries and exchange of knowledge
Building inclusive and integrated campuses – taking up activities which could bring emotional attachments of students to the campus
Participatory Governance models – facilitating participation of students in governance processes
Building robust financial models – supplementing Government resources by getting funds from alumni and also from corporate (CSR)
Promoting value education by building in universal values and life skills into education.
The valedictory session will be chaired by Shri Prakash Javadekar, Minister for Human Resource Development in which each of the eight groups will make presentation on the course of action that they have agreed upon. This will be debated further in the Plenary Session and it is expected that a comprehensive action plan would emerge for improving the higher education sector in the country.

This Conference is in continuation of the efforts being made by the Ministry for evolving an action plan for transformation of the higher education sector. The first among this was held in Delhi during Vice-Chancellors’ Conference from 26-28 July, 2018.